NBA Hall of Famer Says Shen Yun ‘A Must’ 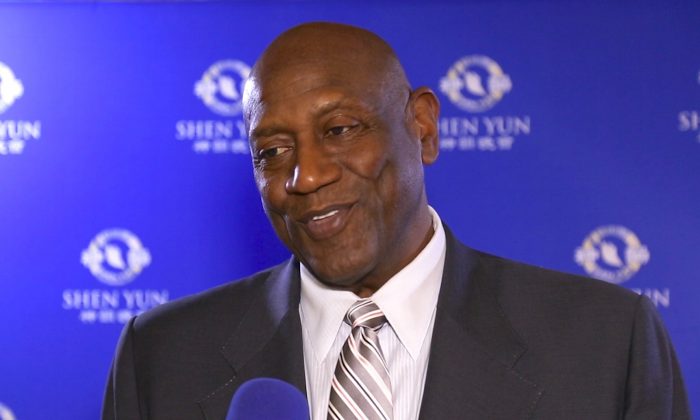 Spencer Haywood attends Shen Yun Performing Arts at The Smith Center for the Performing Arts in Las Vegas, on Jan. 22, 2016.. He felt Shen Yun was important for its message of peace, hope and joy. (Courtesy of NTD Television)

This seemed to be the case for Spencer Haywood, who watched Shen Yun Performing Arts Jan. 22 at Smith Center for the Performing Arts. Mr. Haywood is a former NBA star who was recently inducted into the Hall of Fame. His stellar basketball career included a 1968 Olympic gold medal for USA, 14 seasons in the NBA including the NBA title in 1980, and four NBA All-Star Game appearances.

Standing 6’8” tall and dressed in a grey suit with a striped tie, Mr. Haywood shared his enthusiasm after the performance.

“I just love the skill of the dancers. The dancers were just superb, and being an athlete myself, you can spot another athlete. That’s really wonderful,” he said.

Shen Yun is a New York-based classical Chinese music and dance company that has been touring the globe for 10 years on its mission to revive traditional Chinese culture, which is believed to be a gift from the heavens.

Each performance is a window into China’s 5,000-year history. Shen Yun’s website states, “through the universal language of music and dance, Shen Yun weaves a wondrous tapestry of heavenly realms, ancient legends, and modern heroic tales, taking you on a journey through 5,000 years of Chinese culture.”

Mr. Haywood feels that the performance brings much needed culture to this tourist and entertainment mecca.

“What this particular program brought to Las Vegas is it brought some culture that we sorely miss,” he said.

Shen Yun displays China’s culture through 20 pieces, which include vignettes of stories and legends that span China’s history from the Yellow Emperor as well as the Tang and Song Dynasties through to modern times.

For Mr. Haywood, the storytelling played a significant role in the performance.

“The storytelling is excellent. And that’s what’s most important about it, to deliver the message and to deliver in such an artistic form—it’s excellent.” He added that stories conveyed artistically through dance speak volumes.

This was Mr. Haywood’s first time seeing Shen Yun, so it was a learning experience, too.

“The educational component to this particular show is that you give us Americans … a chance to understand Chinese history, to understand that this performance could not take place in China, but yet it is here [and] throughout the world, so it is an education in itself,” he said. “And one of these days soon, it will be returning to China.”

Although Shen Yun has become and international phenomenon with consistently sold-out performances in the Southwest United States for the past few years, it cannot be seen in China today, where traditional culture has been nearly lost.

China’s culture is deeply steeped in spirituality, belief in the divine, and references to heaven. With its three main belief systems of Confucianism, Buddhism, and Taoism, Chinese culture has developed a rich and profound system of values.

These values touched Mr. Haywood, who felt the positivity of Shen Yun.

“It was a message of peace, a message of hope, and also it was a message of joy. Most importantly, it was about joy and that there was a higher power involved—that you will reach that, as we all were dropped down from heaven, and if we do right on earth, we will go back into heaven, so it’s just excellent. I love it,” he said.

It won’t be Mr. Haywood’s last time seeing Shen Yun: “I just can’t wait until next year! I know it’s a new show, [and] I’ll enjoy it just as much.”

Seeing Shen Yun is a must-see. “For a friend, I would say it’s a must. It’s just something that you must take part in.”