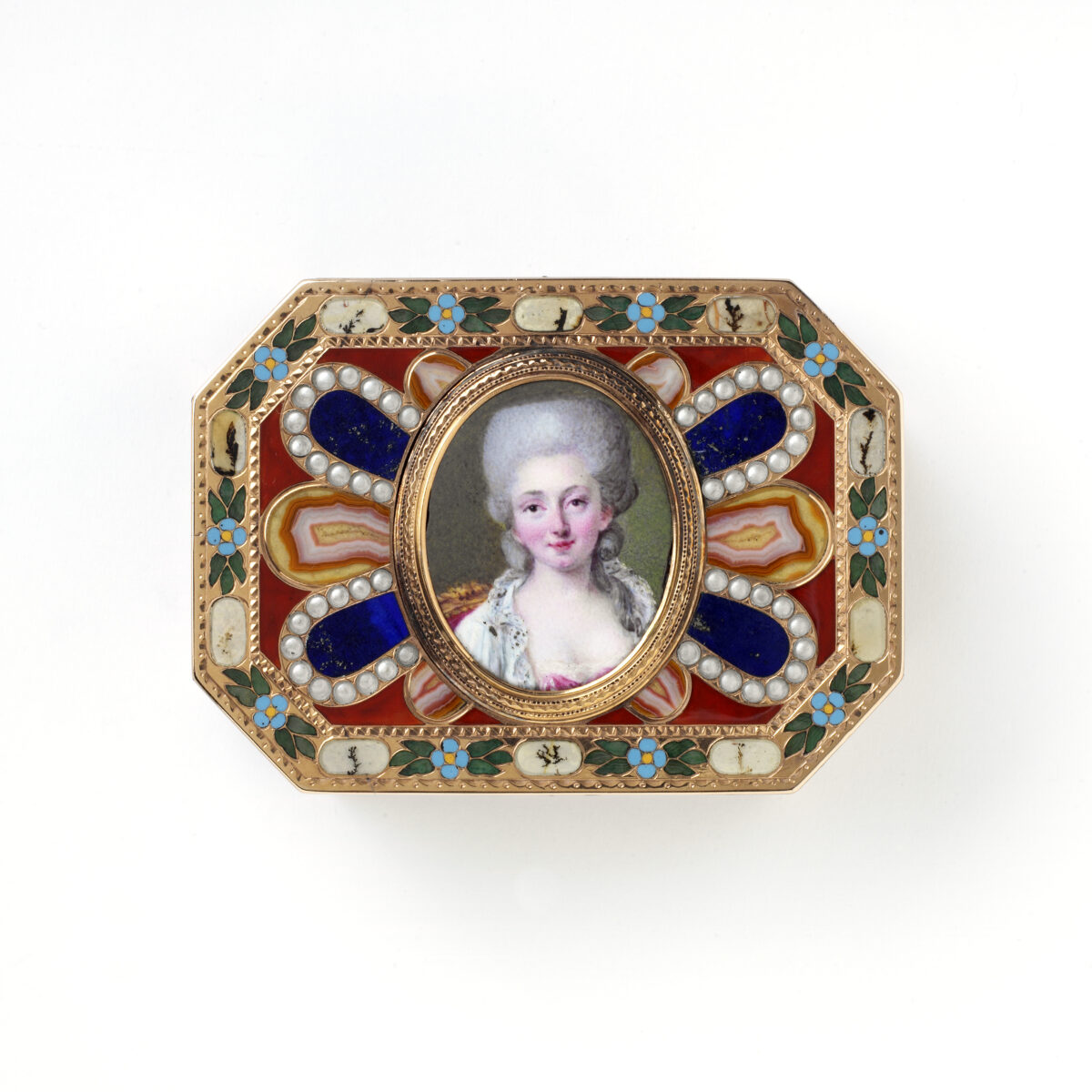 Uncovering the Stories of Nazi-Looted Art

Between 1933 and 1945, Jewish art collectors in Germany and Nazi-occupied Europe were systematically forced into exile, deported, or murdered by the Nazis. The Nazis forced Jewish art collectors to relinquish their businesses, academic positions, and possessions. Many of their art collections were confiscated, dispersed, sold, or simply destroyed.

After World War II, the Allies and other European countries tried to return many of these stolen artworks. But despite these efforts, the complete provenance of many artworks in museums and private collections are still unknown.

The “Concealed Histories: Uncovering the Story of Nazi Looting” exhibition at the Victoria and Albert Museum, in London, exposes this dark chapter in the history of art collecting. A selection of exquisite gold boxes, pietre dure (hardstone mosaics), portrait miniatures, and micromosaics from The Rosalinde and Arthur Gilbert Collection, one of the world’s most important decorative arts collections, are on display. All of the objects exhibited were once owned by Jewish art collectors, and the display shows how eight collectors and their families were persecuted by the Nazis.

“The objects are incredibly beautiful and great examples of craftsmanship and virtuosity; … the contrast to the histories that we tell through these objects could not be starker,” Dr. Jacques Schuhmacher said in a phone interview.

Schuhmacher is the Rosalinde and Arthur Gilbert provenance and spoliation curator at the Victoria and Albert Museum. He uncovered the personal stories of the Nazi persecution behind these objects in his role as the UK’s first full-time museum provenance researcher. The exhibition shows his progress so far.

In the past, museums and collectors were interested in the history of an object only if it came from a prestigious collection, Schuhmacher explained. “So normally, when a curator acquired an object at the Victoria and Albert Museum, they only recorded from whom the museum received the object, and that did not change in 1933 when the Nazis seized power. And it also did not change in 1945 when the Allies defeated the Nazis and the extent of the Nazi looting became apparent.”

Interestingly, just after the war, the person responsible for the restitution of Jewish libraries—John F. Hayward, “who was intimately familiar with the history of Nazi looting”—even he did not ask specific provenance questions, Schuhmacher said.

As art collectors, husband and wife Sir Arthur (1913–2001) and Rosalinde Gilbert (1913–1995) were no different. The Gilberts were acutely aware of Nazi crimes. Born in London to Eastern European Jewish immigrants in 1913, they first made money in fashion in the 1930s. Then they immigrated to Los Angeles in 1949, where Arthur became a wealthy real estate developer enabling the couple to build a world-class art collection.

“They were motivated by the object—they were mesmerized by the objects. They wanted to own them and add them to their collection. And like many other collectors, they simply did not ask detailed questions,” Schuhmacher said. Yet they were aware of the Nazi atrocities; the Gilberts generously supported charities that commemorated victims of the Holocaust, he added.

Even if collectors had asked questions, the answers may not have been forthcoming, as art dealers had little information about the objects they were selling.

Since the 1990s, museums and art collectors ask about the previous ownership of any object they’re interested in, especially the history of an object between 1933 and 1945.

One of the most important events on Nazi-looted art was the Washington Conference on Holocaust-Era Assets held Nov. 30 through Dec. 3, 1998. Art officials and 44 governments agreed on a set of 11 principles to address Nazi-looted art in their collections.

“The significance of the Washington conference cannot be overstated,” Schuhmacher said. After the conference, museums around the world began to proactively look at their collections, identifying art that had belonged to Jewish families.

“What I find interesting is that UK museums did not take this as an opportunity to talk about this topic to their visitors and communicate the difficulties in conducting this research to them.” “Concealed Histories: Uncovering the Story of Nazi Looting” is the first exhibition of its kind in the UK.

Provenance exhibitions are very common in Germany and in the United States, Schuhmacher explained. In Germany, practically every museum has put on a display about objects in their collections that were once in the hands of the Nazis. But German museums often had Nazi-looted art delivered to their doorstep by the Gestapo in wooden boxes labeled as “Jewish Property.” Whereas UK museums acquired objects after they had passed through several art dealers, so it’s more challenging to clarify those objects’ provenance, he said.

“Museums struggled enormously with this research, especially because it was carried out by curators who performed this research in addition to their normal tasks … cataloging objects and organizing exhibitions.

“A museum like the Victoria and Albert has millions of objects, … [and] I would say a large number of them have significant gaps in their provenance. So where do you even start? So they started identifying objects with a gap. But a gap doesn’t necessarily mean that there is a problem with the object; it just means that there is a gap,” Schuhmacher said.

No definitive list of Nazi-looted art exists for museums to compare their collections to. To clarify, such provenance requires archival research, an understanding of the history of Nazi looting, and a familiarity of the relevant archives in Germany and other European countries, he added.

“Sometimes archives don’t hold the answers to the questions we’re trying to resolve. It’s possible that the documents that we are looking for do not exist, or that they were destroyed during the war.

“The point is to be open and transparent about this provenance and put it on display for everyone to see and to make it clear: This is what we know about it, and this is what we don’t know about the object,” Schuhmacher said.

In “Concealed Histories: Uncovering the Story of Nazi Looting,” Schuhmacher and the Gilbert Collection curator Alice Minter have created a display that does just that.

Schuhmacher tells us what he’s learned about two of the eight objects exhibited and the plights of the Jewish people who once owned them.

He is optimistic that exhibition visitors may be able to provide clues to the gaps in the provenance of some of these objects, such as a pair of monastery gates that once belonged to an Orthodox church in Kyiv, Ukraine. The gates are thought to have been gifted to the monastery by Catherine the Great of Russia.

Schuhmacher wrote to Hearst Castle and found out that Hearst had bought the gates in 1935 from a Jewish art dealership with branches in Frankfurt and Berlin, called J. & S. Goldschmidt. But the circumstances of the sale are unclear and troubling, as in 1935 the Nazis issued the infamous Nuremberg Laws, making the persecution of Jews in Germany legal.

Schuhmacher delved further into the history of the company and found that in 1933 (when the Nazis seized power), the owners had to hand over their gallery space in Berlin to a Nazi association of German artists. In 1937, the Goldschmidts were told to dissolve their company by the Nazi authorities as part of a wider program to remove Jews from the art business. Both Goldschmidts had already left Germany: Julius moved to London; Arthur moved to Paris, subsequently escaping to Cuba when the Nazis invaded France.

Another puzzling provenance is that of a stunning 18th-century German snuffbox, created by Dresden goldsmith Johann Christian Neuber, which the Gilberts purchased in 1987 with no provenance attached to it. Schuhmacher searched published sources and also archives in the Netherlands and Germany. He found the box listed in a 1912 catalog published by German collector Eugen Gutmann (1840–1925), who was born to Jewish parents but had converted to Protestantism. Gutmann founded the Dresdner Bank, which had branches across Germany, and this “wealth enabled him to put together a collection which was as magnificent as the Gilbert Collection,” Schuhmacher said.

Schuhmacher was then able to contact a descendant of Gutmann named Simon Goodman, the Anglicized version of Gutmann, who had written “The Orpheus Clock: The Search for My Family’s Art Treasures Stolen by the Nazis.”

There was an enormous gap in the provenance of the snuffbox—from 1912 to 1987—which was particularly concerning because of what happened to Eugen Gutmann’s son Friedrich and his wife Louise. The couple had inherited the bulk of Eugen’s collection when he died in 1925. They lived in the Netherlands, where they were safe from Nazi persecution until 1940 when the Nazis invaded. Because the Gutmann collection had been published, it was well-known to Nazi art dealers, and they descended on the couple’s home in 1942 and seized the collection.

The Nazis meticulously created an inventory of everything that they seized from the Gutmanns, but this box is not on the inventory, Schuhmacher said. It’s not known what happened to the box. The Gutmanns could have sold the object between 1912 and 1942, or the object could have been in the collection when the Nazis seized the art, but they didn’t list it.

In 1943, Friedrich and Louise were put on a train to Italy, or so they were told, but the train took them to the Theresienstadt ghetto and they were both murdered.

To find out more about “Concealed Histories: Uncovering the Story of Nazi Looting,” visit VAM.ac.uk. The exhibition ends on Jan. 10, 2021.

Lorraine Ferrier
Follow
Lorraine Ferrier writes about fine arts and craftsmanship for The Epoch Times. She focuses on artists and artisans, primarily in North America and Europe, who imbue their works with beauty and traditional values. She's especially interested in giving a voice to the rare and lesser-known arts and crafts, in the hope that we can preserve our traditional art heritage. She lives and writes in a London suburb, in England.
SHARE
Friends Read FreeCopyFacebookTweet
SHARE
Friends Read FreeCopyFacebookTweet
You May Also Like