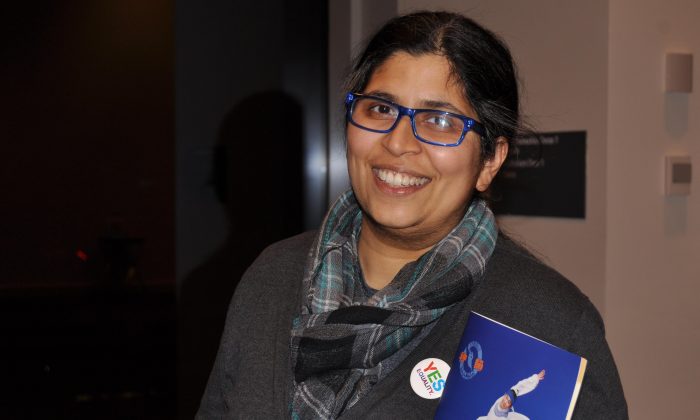 DUBLIN, Ireland— National Radio presenter for Newstalk’s Global Village, Dil Wickremasinghe, was at the opening night of Shen Yun Performing Arts in Dublin, and was full of praise for the show.

“It is something for sure that people are not going to see anywhere else and I can see why they have come to Dublin for the fourth year and to have it in the Convention Centre. I really would recommend it.”

The company’s dances are presented in the form of mini-dramas, with the dances telling stories from China’s history and legends from ancient times all the way to the present. Shen Yun has taken it as its mission to revive China’s divinely-inspired culture.

Ms. Wickremasinghe said that she was thinking that Shen Yun was comparable to the River Dance of Ireland but after seeing the performance, she realised Shen Yun  was much more than that.

According to Shun Yun’s website, “For 5,000 years divine culture flourished in the land of China. Humanity’s treasure was nearly lost, but through breathtaking music and dance, Shen Yun is bringing back this glorious culture.”

“It is quite interesting because for me, when I think of China, I think of materialism, very driven and ambitious, which is in direct contrast with the teachings of Confucianism, Daoism and Buddhism,” says Ms. Wickremasinghe, reflecting on China today, which has been under decades of communist rule, compared to traditions of China.

“[Shen Yun] is much more than a night of entertainment; it is an insight into an injustice that is happening in China and how we should really go back to basics, where things like tolerance and living in an equal and just society is the best for all of us,” said Ms. Wickremasinghe.

She added that there is an important message in Shen Yun.

“I am so used to seeing Irish Plays that depict times in our country where there was huge injustice and unhappiness, but Shen Yun was delivered in a beautiful and entertaining way so people can come to Shen Yun and enjoy the performance but take home the message that living in a tolerant society is good for everyone.”

Ms. Wickremasinghe said the spirituality presented in the performance is very important in today’s world.

“There is a foundation of spirituality, which I think is something we all need to embrace in this world and if we did, we would be happy human beings and be kinder to each other,” she said.

“I really found the whole evening an absolute pleasure but it is much more than just the performance. There is a real message there, that maybe we should pause from our busy life and reconnect with our spirituality because that is the first step for living a more fulfilled life.”