‘My Heart Goes Out to These People’ After Watching Shen Yun 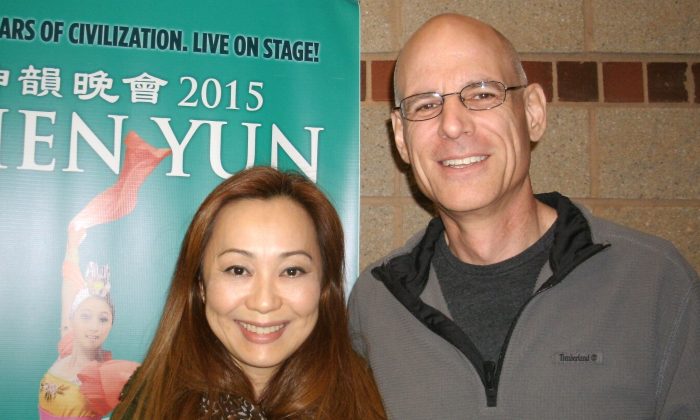 Craig Sheehan and Mariko Garfield attend the Shen Yun performance at Peace Center for the Performing Arts in Greenville, S.C. on May 1, 2015. (Epoch Times)

GREENVILLE, S.C.—Craig Sheehan, a sales professional, and Mariko Garfield, an herbalist and energy medicine practitioner, were deeply impressed after watching the Shen Yun performance at Peace Center for the Performing Arts in Greenville, South Carolina.

“I loved the costumes, and the dancing was fantastic.”

“The music was great. And the background animations intertwined with the dancers, it was really good. I really liked it,” he said.

Ms. Garfield thought the performance was amazing and highly appreciated the refined skills and talents of the dancers.

“The whole time I was thinking how much they had to practice. You know, because they perform so effortlessly.”

“And it looks easy, I mean, but it’s not. I’m not a dancer, but I was just thinking how much they had to practice, to make it look effortless,” she said.

What really touched Ms. Garfield’s heart was the portrayal of Falun Dafa practitioners’ courage when being persecuted in China for simply wanting to meditate and practicing their spiritual belief.

“Another thing that I was really touched by was the fact that Chinese people are still struggling, and to even meditate without getting arrested or being tortured. I have heard a lot about those stories myself,” she said.

Falun Dafa is meditation practice and spiritual belief rooted deeply in ancient Chinese culture and values. It follows the principles of “Truthfulness, Compassion, Tolerance.” Since 1999, the Chinese communist regime has harshly persecuted the tens of millions who practice Falun Dafa in China because of their belief.

From watching the performance, she had a sense of gratitude and appreciation that outside China, like in America, one can freely practice one’s belief.

“My heart goes out to these people, because in America, we don’t think about praying and [then] get tortured, beaten or even killed,” she said.

Ms. Garfield thinks that this message is a very important one, because freedom is something that should not be taken for granted. She hopes that many people will be able to watch the Shen Yun performance and come away with the same impressions she did.

“It was a great, not only a beautiful, performance or show, but it really made me think about how fortunate we are and how much we take everything for granted, living in America,” she said.

Ms. Garfield is from Japan and was there when the big earthquake hit the country a few years ago. After watching the finale of the performance The Divine Renaissance Begins, she could identify with disasters and how they are related and can affect people’s hearts.

In Japan, actually, after the earthquake, we have awakened spiritually, which we had lost. You know, so I think people are more united now.”

“People realize the importance of helping one another … we kind of forgot the most important thing behind, which is the heart to help one another,” she said.

She believes if one can learn and transform oneself from the lessons of negative things like disasters and catastrophes, one “can turn any kind of poisonous situation, catastrophic situation, into unity and harmony.”

“Sometimes it can the biggest gift that anyone can get,” she said.

Reporting from Xiaoxu and Thai Ton