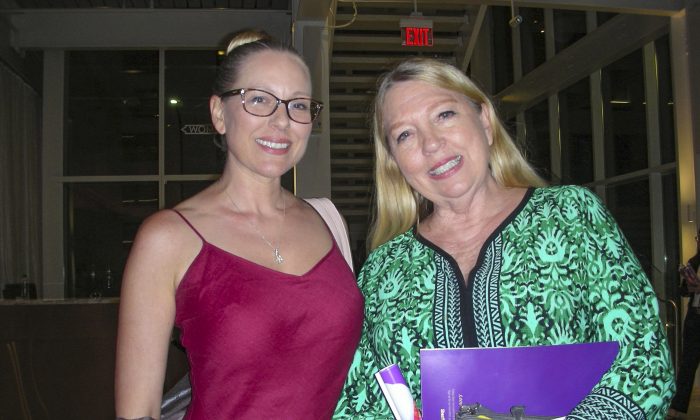 “I thought it was fascinating, the concept of the light and dark, I thought it was a really wonderful way to reach people with deep concepts, by bringing people in with art,” said Lochead.

Allison thought similarly, adding that “the combination of the message with the art was beautiful, very amazing!”

When New York-based Shen Yun seeks to do is revive the authentic traditional Chinese culture, and do it through art. Formed in 2006 by award winning artists, the company has become the world’s premier classical Chinese dance company, touring the globe each year.

“It was so much different from what I’ve expected,” Allison added. “I expected the dance and the music but I was surprised by the message about what happened in China and all the aspects of it. I really like that; something for me to think about.”

Unexpected for some theatergoers is the fact that not only is Shen Yun not from China, but not allowed to perform in China at all.

Traditional Chinese culture is said to be divinely inspired, and was nearly lost over this past century, when the communist regime took power in China. Through classical Chinese dance, ethnic and folk dances, stories from history and legend, and a unique production, Shen Yun shows the true essence of this 5,000-year-old civilization.

It made the pair of musicians want to learn even more about China.

“It was fascinating. It was really beautiful, I would definitely recommend it,” Lochead said.

Being musicians, they enjoyed the opportunity to hear unfamiliar instruments. Included into the classical Western orchestra in the pit are a variety of Chinese instruments like the pipa (Chinese lute) and erhu (a two-stringed instrument) and a bevy of Chinese percussion instruments.

“Normally we don’t get to hear instruments like that, those are different and so it’s wonderful to hear them perform on such a high level,” Lochead said.

Combining Eastern and Western musical schools is no easy feat. Lochead shared that she had heard ethnic music before, and blended styles, but they weren’t always pleasing to the ear. She praised the Shen Yun composers for the way they were able to harmonize Chinese melodies with Western arrangements.

Allison said she was impressed as well.

“I was very impressed by the composers. The compositions were very complex. Very interesting, beautiful!” she said.

“The orchestra is just marvelous.”