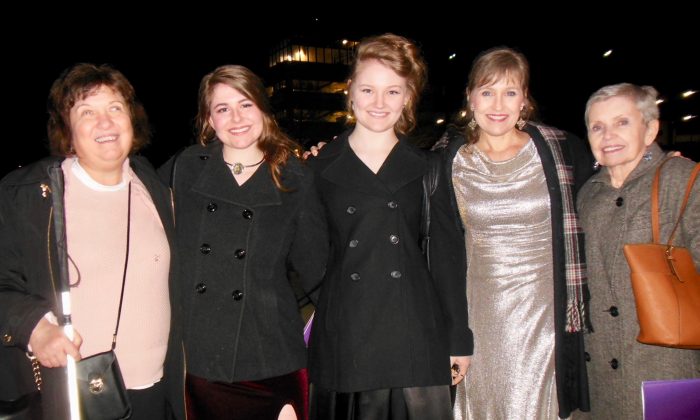 AUSTIN, Texas—Few things in the world can really be described as perfect. Struggling for the right word to describe the performance she just saw, professional flutist Ally Hinman settled for perfect.

“I feel that it was a fabulous portrayal of art,” Hinman said after seeing Shen Yun Performing Arts with family members and her flute teacher Sheryl Goodnight at the Long Center for the Performing Arts on Jan. 4.

With classical Chinese dance and a unique orchestra, New York-based Shen Yun travels the globe on its mission to revive the authentic traditional Chinese culture through the universal language of art. And according to Hinman, they have achieved something great.

“[Shen Yun] took the physical aspects and emotions of the body, as well as the sound of music and blended it together so perfectly and in artistic tranquility that it’s just so hard to express—and everything was so perfectly timed,” she said.

“And it was perfect.”

Hinman zeroed in on the auditory experience; peppered between the dance pieces which tell stories from ancient myths, legends, and history, were music solos like the two-stringed erhu, an expressive instrument sometimes called the Chinese violin, and vocal soloists performing original Chinese songs in the bel canto style.

Vicki Wade, physical therapist, was moved by the translated English lyrics that were projected onto the digital backdrop. The songs, philosophical in nature, spoke of faith.

And then there was the orchestra, which blended Chinese instruments into a Western symphony to perform all-original compositions and created something pleasing yet different.

“Just the harmonies, the melodies, and a lot of counterpoint in there as well. And I loved the Chinese instruments,” Hinman said. She and Goodnight shared enthusiasm about the music, discussing the different passages they heard, and delved into the program to learn more during intermission.

Hinman was moved by more than just the technical abilities of the artists. She experienced a traditional culture that goes back 5,000 years.

“I really admire their culture as well; they’re so respectful to their elders and they embrace their culture from their past and really dig into their roots,” Hinman said. She saw a variety dance styles from the many ethnic minority groups across China, along with the classical style, and learned along with the audience that the aerial and tumbling techniques performed actually preceded other forms, like gymnastics.

“I thought it was really beautiful,” Hinman said.

Goodnight, a piano and flute virtuoso, admired the artists as well.

“It was flawless,” she said of the technique. Goodnight, who is the principal flutist of Temple Symphony Orchestra and who teaches flute at Temple University, is known for her perfect, encyclopedic memory that has allowed her to memorize every single piece she has played. She does not say such things casually.

“I thought everybody’s technique, especially in the orchestra and the soloist, it was flawless. It was impeccable,” Goodnight said. And as a performing artist herself, she knows this requires more than just perfect technique; the artists need passion and something to express in order to truly move the audience.

“You can see their passion in their music, and it’s just absolutely beautiful. The orchestra had such a clear sound and they blended beautifully,” Goodnight said. “Everything was so clear, and it’s so well in tune. Though you had multiple performers, it sounded like one instrument.”

Madi Moore, a nutritionist in training, was the one the group had to thank for the experience. She had seen Shen Yun three years back, and decided to bring the group.

“It was absolutely beautiful,” she said. “The music is phenomenal … and the performers—the costumes are beautiful. They’re just very well trained and it really shows how much work that they put into it.”