Musician: ‘There was something in the air that touched my heart’ 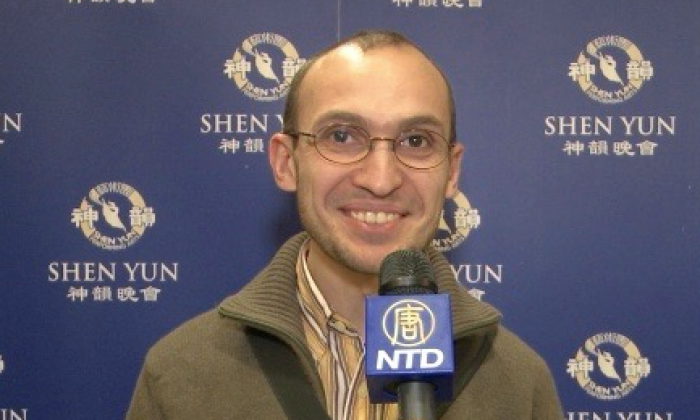 FRANKFURT, Germany—Frankfurt’s Jahrhunderthalle hosted the Shen Yun Performance for the ninth year in a row. This well-known cultural center has hosted many well-known performances and performers since it opened in 1963.

During Sunday’s matinee, Mr. Sergio Gelsomino was in the audience. This Italian-born musician plays the German flute, also called transverse flute since the age of 9. At the age of 11, he was accepted into the Vincenzo Bellini in Caltanissetta Music Institute. Just one year later, he joined the Gruppo Cameristico Nisseno and then the Ensemble Trio Cimarosa.

By 2010, he graduated in musicology from the University of Bologna, and after some years he joined the Ruhrstadt Orchestra Schwerte as the first flutist and teaches the German flute at the music school Dortmund.

Mr. Gelsomino was amazed by everything he saw on stage, “The atmosphere, the music and the colors were amazing. There was something in the air that touched my heart. I lack the words to describe what I felt. I even cried from the beginning of the performance.”

The feelings he had throughout the show were wonderful and he shared, “I felt so good, which was absolutely great.”

Actually, Mr. Gelsomino felt from the beginning of the show that he and the audience were as one and partook in the performance.

His feelings were at the same time worried and sad, yet happy. He said, “It was as if the feelings were all lumped together into one … and then suddenly my worries disappeared.”

Reporting by NTD and Heide B. Malhotra