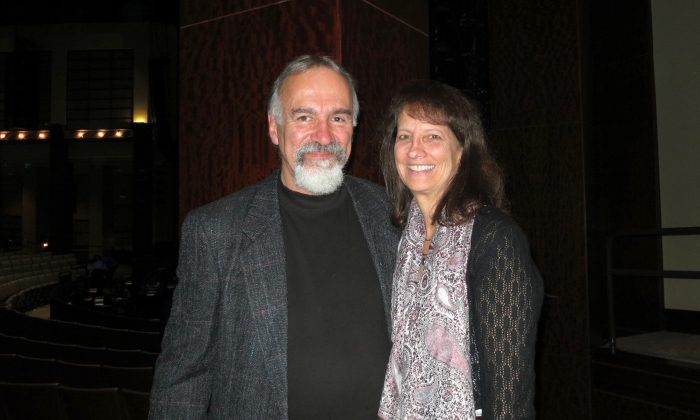 Musician Jamie Coan and professor Leslie Sautter. The two were impressed with the sights and sounds of Shen Yun Performing Arts at the North Charleston Performing Arts Center, on Jan. 27, 2016. (Sally Sun/Epoch Times)

NORTH CHARLESTON, S.C.—Recording artist Jamie Coan kept leaning to get closer and see the musicians in the orchestra pit better. He knew and loved that the Chinese instruments were right next to Western ones, but he wished he was closer so he could see exactly what instrument was making what sounds.

“I love the music. I love the intermingling of Western and Eastern instruments,” he said. “It is very pleasing to the ears. Just beautiful!”

As part of Shen Yun Performing Arts’s aim to bring 5,000 years of traditional Chinese culture to world, surprisingly the company melds the East and West into one sound. Chinese instruments play the melody atop the full Western orchestra giving full, rich, grandeur to original compositions.

The beauty of the music lifted his soul and transported Mr. Coan. “It takes me somewhere. It transports me.” The multi-instrumentalist, who plays guitar, violin, mandolin, dobro and banjo, has recorded seven albums.

“I think probably the music was written to promote that quality of being uplifting,” he said. “And I think, perhaps, I am sensitive to that, I don’t know. But, I think that’s the way it was intended.”

Shen Yun does aim to uplift listeners with its music. According to the Shen Yun website, China had been known as the “Celestial Empire” because of a traditional belief that it is a land where the divine and mortal once coexisted.

The performance resonated with Mr. Coan, who described the theme of the entire evening as universal: “the triumph of good … heavenly over the temporal.”

“I particularly like the string player,” said Leslie Sautter, professor of geology at the College of Charleston, and a dear friend of Mr. Coan. The pair attended the performance at North Charleston Performing Arts Center on Jan. 27.

The two-string erhu was new to Ms. Sautter. Having a history of over 4,000 years, it is extremely expressive and can be used to mimic sounds of nature. She said, “that was beautiful.”

Agreeing Mr. Coan said, “The sound of it, it was beautiful, excellent player.”

In addition to the music, Shen Yun is known for classical Chinese dance which allows China’s vast history to be portrayed wordlessly through short vignettes.

“I was very impressed by the beauty of the form of the dancers, the choreography, and it really gave me an appreciation for the art within China and the beauty of it, and how beautiful the people are, too,” Ms. Sautter said. “Costumes are stunning.”

Mr. Coan said, “This is a spectacle”—the visual elements of the dance, costumes, backdrops—was “beautiful to behold”, the music “very uplifting” to hear, the dancers “breathtaking.”