'It took me to another place' 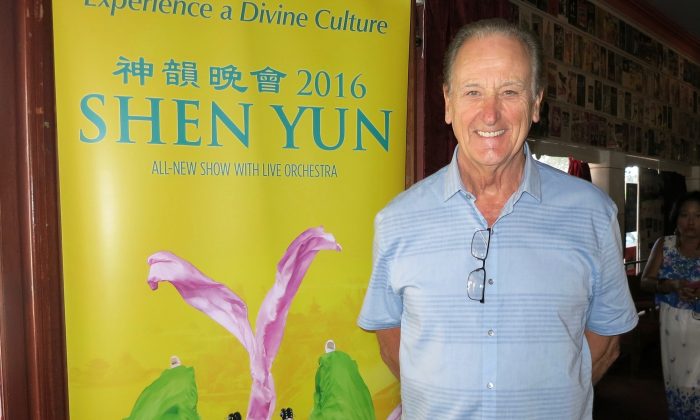 PERTH, Australia—The magic of Shen Yun Performing Arts continued to enchant the audience at the Regal Theatre for a matinee performance on Feb. 4. With another packed house the audience expressed something special, their applause encouraging a curtain.

In the audience was Ian Pickford, a professional singer and guitar player from Wales, UK, who now resides in Perth, he was delighted to see Shen Yun, as he was very interested to see what it would be like.

“It was magical,” he said. “It was wonderful. The performance is outstanding. World class! World class performances from the singers, the dancers, everything was really, really good. I’m really impressed.”

Based in New York, Shen Yun’s mission is to revive traditional Chinese culture. Through music and dance it brings to life on stage insights into 5000 years of history. With classical Chinese dance as the base it also includes folk and ethnic dance, a blended orchestra of traditional Chinese instruments and classical Western instruments and a state-of-the-art digitally animated backdrop.

“Shen Yun Symphony Orchestra blends the spirit of Chinese music with the power of a Western orchestra,” the Shen Yun website states.

“All-original compositions draw upon five millennia of culture and legends. Western strings, percussion, woodwinds, and brass accentuate the sound of ancient Chinese instruments—like the two-stringed erhu and the plucked pipa. Never before have the exquisite beauty of Chinese melodies and the grandeur of a Western symphony been so seamlessly combined.”

As a professional musician Mr. Pickford was enchanted by the blend of sounds and instruments.

The website states, “Shen Yun’s digital-backdrop team creates vividly animated settings, extending the stage and transporting the audience to a world where heaven and earth are one.”

The synchronisation of the backdrop with the dancers on stage and the orchestra delighted Mr. Pickford. “The coming down from the heavens, and the way it’s been fused with the performers on the stage,” he said. “They’ve fused the technology so you can actually believe they’ve gone down and gone up to heaven, you can see that. That’s wonderful, I’m really impressed with that.”

Shen Yun transported Mr. Pickford to the land of the divine where divine beings reside. “The celestial maidens dancing, it took me to another place. I thought that was quite heavenly,” he said. “The movements of the girls is just mesmerising.”

Mr. Pickford said Shen Yun was very difficult to explain to others as there is nothing else in the world that compares. “It’s a unique experience,” he said.