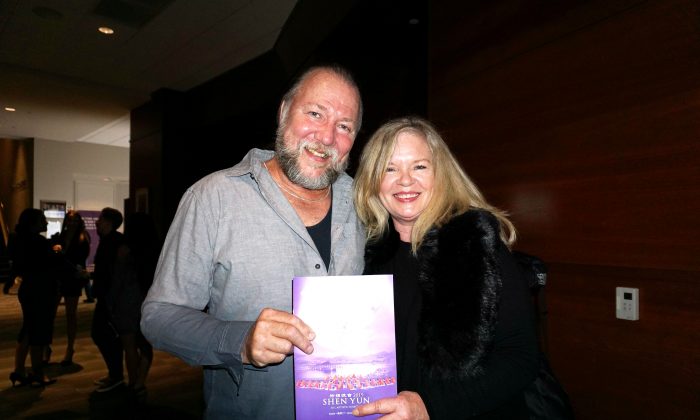 AUSTIN—Billy Young thought Shen Yun Performing Arts’s orchestra was so perfect that it “sounded like a recording.” Young is a talented musician himself, having composed over a thousand songs and is currently doing a recording in a studio.

Young and his wife, LeAnne, saw Shen Yun at The Long Center for the Performing Arts in Austin on Jan. 5. The company tours the globe with a mission to revive China’s semi-divine culture that was nearly lost after 60 years of communist rule. The dance and story pieces are accompanied by a live orchestra that blends Chinese and western instruments, rendering a distinctive sound. Young said as a composer he was able to tell how difficult it would have been to compose music for such a unique orchestra.

“All of that different music and every tune was different for every piece, and you have to hand scribe it down,” Young said. “I know how much it takes to do stuff like that. It’s a lot of work.”

Young, who is a professional keyboardist and vocalist, praised the composers of the many pieces he heard throughout the evening, saying that when he was listening to the music he was reminded of other great composers in history.

The musician was fascinated by how the composers were able to blend the Chinese and western instruments.

“I was listening to the balance where the conductor was bringing in different instruments,” he said. He said he could hear “the uniqueness of some of the Asian instruments and western instruments together.”

According to Shen Yun, to seamlessly blend these two systems is not an easy feat.  Many have tried and failed as it’s challenging to find harmony between disparate sounds of the East and West. The way Shen Yun achieves this is by using the western orchestra as a foundation, while traditional Chinese instruments lead the melodies.

The Chinese instruments in the orchestra include the erhu, dizi, pipa, and suona. They differ in character compared to Western instruments and are able to invoke a variety of complex emotions in the listener.

For instance, the erhu—or the two-stringed violin—is capable of imitating sounds from chirping birds to neighing horses. It has a history of over 4,000 years and was an integral part of folk performances, operas, and imperial banquets throughout the dynasties.

In the hands of a master, this two-stringed instrument has the ability to express sounds of joy, sorrow, grace, or tenderness. It also has been said that the erhu is an instrument most resembling the human voice. Young was particularly intrigued by this instrument, especially when the erhu virtuoso performed a solo.

“The lady who played the two-stringed instrument is exceptional,” he said.

Meanwhile, Young said when listening to Shen Yun’s music, he felt as though it transported him to the ancient Chinese palaces, battlegrounds, bustling restaurants, and Mongolian plains.

“It takes you there. It took me to China and I’ve never been,” he said.

His wife also agreed with him, saying that the music helps the viewer appreciate the stories more. LeAnne also enjoyed the solo vocalist featured in this year’s program.

In addition to the various dance pieces, Shen Yun performances also include solo vocalists, who use the bel canto technique to sing—a technique believed to produce the most beautiful and pure tone of voice, according to its website.

Stories Have an Important Message

Along with the music, LeAnne, who is a designer, also enjoyed the story dances, especially the last piece, “The Final Moment.” The piece is set in contemporary times and tells a story about modern people and a battle between good and evil. She enjoyed the themes portrayed and found them incredibly relatable, for instance, when our constant use of cell phones was made fun of.

“I thought that story was really funny because it’s so true,” she said. “Everywhere you go, every day when I’m walking either downtown to my neighbor, everyone is glued to their phones.”

The last piece also touches on some spiritual themes, which are abundant throughout the performance. China was once known as the Divine Land and the name used to describe a place where deities and mortals coexisted. People were heavily influenced by Buddhism, Taoism, and Confucianism in the past and strove to lead virtuous lives. LeAnne said she particularly enjoyed the spiritual themes.

“I really like the ending of it—the last piece about God and about the world, and how we are going to go to heaven that we came from one day, and we’re going to go back to our creator,” she said. “And I’m really excited about it.”