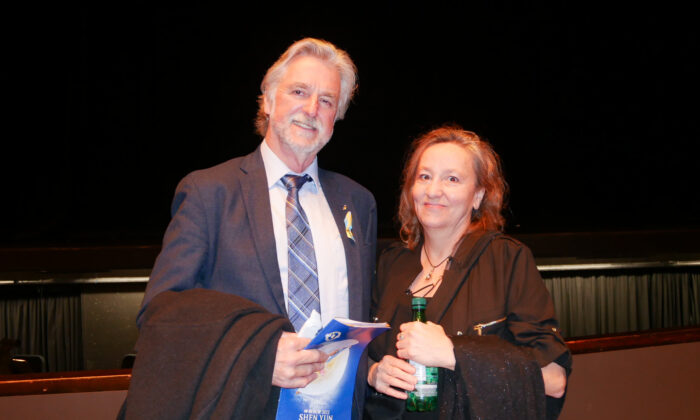 VANCOUVER, Canada—Music is the unspoken language of dance and drama. The musicians of Shen Yun Performing Arts accompany Shen Yun’s dancers flawlessly as they bring to audiences the irreplaceable experience of live music.

“I think the music is exceptionally well integrated with the concept. I thought the orchestra was excellent. Attention to detail, musicianship—very, very good,” said Michael Grunewaldt, a retired musician.

He noted that seeing Shen Yun was his late wife’s way of celebrating life, and that the couple had experienced Shen Yun together twice before this occasion.

“It’s a celebration of life in a sense from my late wife, because she’s the one who coordinated our tickets. We were here in 2018 to 2019,” said Mr. Grunewaldt. “We think that the expression, the talent base, the integration of digital live performance, choreography, costume—is excellent. And well worth being a part of.”

New York-based Shen Yun creates an all-new production every year, and its seven companies take the new program on tour around the world simultaneously .

Mr. Grunewaldt commended the artists on their “depth of feeling and the amount of skill required to perform at this level in front of a live audience day after day.”

“The quality of the whole show? Five stars, it’s excellent,” he added.

Shen Yun’s mission is to revive China’s 5,000 years of civilization and to share its age-old culture with the world through classical Chinese dance and music. The production focuses on presenting China before communism, using stories from the Middle Kingdom’s vast history as inspiration for new choreography year after year.

“I like the concept of adapting history to modern life, and that’s the best way that I can express that. Live performances, genuine, important, and valid,” said Mr. Grunewaldt.

“And freedom of speech is paramount,” he added.

“I do know about that because of the protesting 10 years ago, 15 to 20 years ago. So I also think, ‘Wow, you’re still fighting that?’ That made me sad [that] they’re still jailing people for that,” Ms. Minifie said.

Falun Dafa, centred on the principles of truthfulness, compassion, and tolerance, became immensely popular in the 1990s in China. However, this led to jealousy from the head of the Chinese Communist Party, who viewed it as a threat to the Party’s atheistic ideology and initiated the persecution in 1999.

Although Shen Yun tackles serious issues in its production, the dances are uplifting and filled with hope, beauty, and inspiration. Humor can also be found.

“I enjoy the comedy the best, and I enjoyed the whole idea that it’s before communism,” said Ms. Minifie.