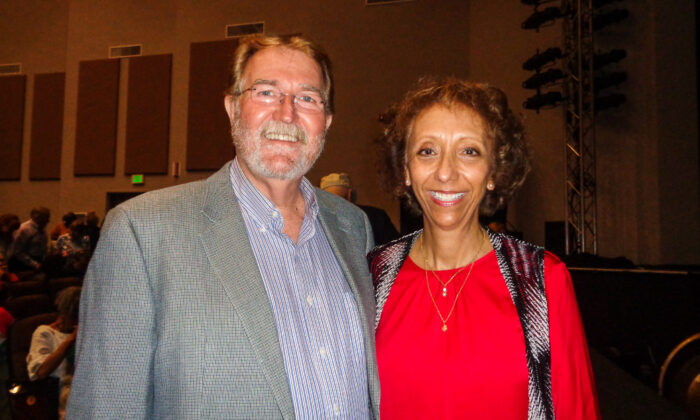 “I was trying to figure out how the ladies do that. So I was in the lobby trying to walk like they do. They’re so graceful,” Vivien, a classical guitarist, said with a laugh.

Her husband, Ed Carroll, is a French horn player and the one who pointed out how Vivien “was already practicing how to walk so gracefully” in the lobby. His observation came after he heard her describe her deep feelings about New York-based Shen Yun and about why the company cannot perform in China today, the homeland of their cultural origin.

“It makes me sad for all of the musicians and dancers [of Shen Yun], to know that they could never do this in their home country. And it’s something that I think the people of China would love dearly. … It’s really wonderful that [Shen Yun’s artists] do put it together so that those of us who have no idea of the history can at least begin to appreciate the difference in the cultures,” Vivien said at the Youkey Theatre at RP Funding Center in Lakeland, Florida on Feb. 12, 2020.

But the Chinese Communist Party has sought to wipe out traditional Chinese culture for the last several decades. They perceive traditional Chinese culture as a threat to their own legitimacy. As part of the campaign, those who practice the ancient Chinese spiritual discipline known as Falun Dafa, and people from other faiths, are persecuted, even to this day. Scenes of real-life persecution and the ways the believers are facing it with compassion and faith are included in the Shen Yun performance.

“I didn’t realize … the Communist Chinese Party, I mean I know that they are regressive and they are, but I didn’t realize that you couldn’t see a show like this in China,” Ed said.

“I think the show is very impressive. The dancers are phenomenal, and the orchestra is extraordinary, and it’s a very spiritual show,” he continued.

Authentic Chinese culture contains a profound connection to the divine and spiritual practices that have been passed on for thousands of years: Buddhism, Daoism, and Confucianism. These traditions appear throughout the stories and song lyrics in a Shen Yun performance.

“I loved the technically crisp music,” Vivien chimed in. “The trumpet player—crazy good. And I do love that they want to express human kindness. And that’s something that’s really important and to acknowledge your Creator is very important. And so tie it to the music, which is our passion … to tie that with faith and then the beauty of the dance. And the ladies and the men are, the ladies are graceful and it’s beautiful to watch.”

Having been a French horn player most of his life, Ed weighed with expertise about Shen Yun’s live orchestra.

Shen Yun incorporates Eastern and Western instruments together for an effect that is unique in the classical music world. According to Shen Yun’s website, “First, the Western orchestra serves as a foundation, accentuating the distinct sound of Chinese instruments. Second, the bedrock of soul-stirring melodies from the ancient Middle Kingdom is fully brought to life by a Western symphony. This is what makes Shen Yun’s music unique and is a new frontier in classical music.”

Ed had words of gratitude for Shen Yun’s artists and the event organizers: “We enjoy it very much. Thank you, thank you [Shen Yun] for coming.”