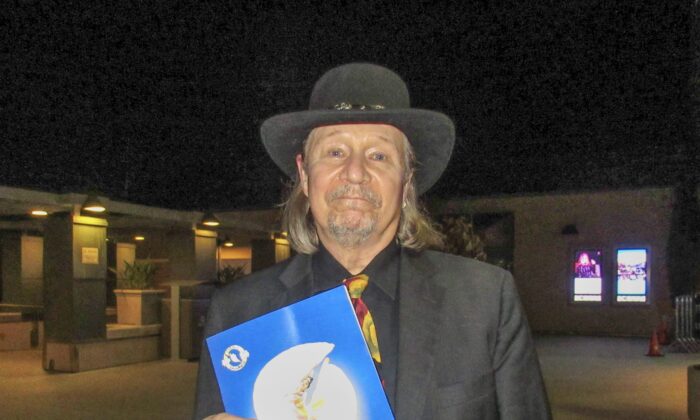 THOUSAND OAKS, Calif.—“It’s greater than the sum of its parts,” said writer and musician Mark Kurasz, after he’d seen Shen Yun Performing Arts at the Fred Kavli Theatre on Tuesday.

Mr. Kurasz was expecting to see just dancing but was blown away when he realized that Shen Yun also incorporated music and theatre.

From a musician’s point of view, the score was phenomenal, he said.

Shen Yun is the world’s leading classical Chinese dance and music performance with a mission to revive the traditional Chinese culture from the pre-communist era.

“It was really good scoring—the background, the way it was all incorporated artistically. I loved the musical segments, the interludes, the breakout. It was just a well-put-together experience. I was very impressed,” he said.

Mr. Kurasz plays the blues on harmonica. He formerly played for the blues group the Allman Brothers. As a writer, he is working on a trilogy of historical fiction.

He spoke of his experience as he listened to the music.

“I just kind of let it all come together without expectation and [Shen Yun] exceeded it. The score really enhances [the performance],” he said adding that the choreographer did a phenomenal job.

The ancient Chinese believed there existed a harmonious relationship between Gods and earthly beings. According to legends, moral and spiritual values were passed down by heavenly deities and were the foundation of the arts and guided the actions of everyday people. These values are portrayed in the dances and music.

Mr. Kurasz was impressed by the dance “A Restaurant Tale,” a comedy where restaurant owners compete for customers. He was also amazed by the athleticism demonstrated in the men’s dances.

“But the grace of the female dancers just had my attention throughout the [performance],” he said.

“[The erhu was] unbelievable. I’ve never heard anything [like it]. It was as graceful as it was beautiful,” he said.

Shen Yun’s dance repertoire includes mini-dramas depicting the persecution of the spiritual practice Falun Gong. A practice that derives from the Buddhist tradition, the adherents of Falun Gong have suffered extreme torture and death over the past 23 years.

Mr.Kurasz explained that he had been inspired to write his trilogy after hearing about the brutal persecution of Falun Gong in China.

“I knew of the brutal executions and how the families, if they wanted to get the body back, had to pay a bullet tax, and it was just brutal. And that inspired me to start writing …  a book,” he said. The theme in the dances portraying the persecution of Falun Gong is about more than just a spiritual hunger,” he said.

One of the dances, “Insanity During the End of Days” recounts the story of a surgeon in one of China’s many organ transplantation hospitals, who is faced unexpectedly with the body of his own daughter, who is an adherent of Falun Dafa. Each year, tens of thousands of Falun Gong are killed for their organs which are used in these hospitals.

“Most people probably don’t know about it. So it was good that [Shen Yun] is bringing that home. So I applaud that too,” said Mr. Kurasz.

The opening performance, “Salvation During End Times” was “eye-catching,’ he said.

The choreography and the special effects of the animated backdrops “got your attention right off [from] the get-go. I knew it all of a sudden. [Shen Yun was more] than just classical dance.”

The traditional values portrayed in Shen Yun enhance each other said Mr. Kurasz. “You have the spiritual …  the music, the dance.  I guess the best way to sum it up would be, ‘It’s greater than the sum of its parts’.”