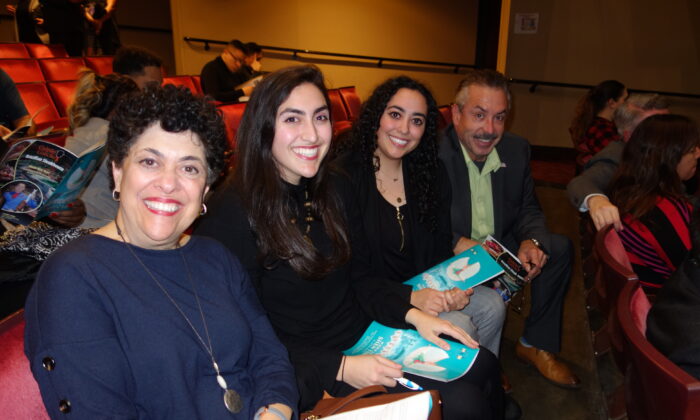 FRESNO, Calif.—After wanting to see Shen Yun Performing Arts for years, two musician sisters were delighted by receiving tickets for the family to a performance. The performance was worth the wait, leaving the whole family in amazement.

Annie and Joy Rubio were given the gift of Shen Yun for Christmas by their mother, Elaine, and attended the performance together with her and their father Fernando, on Feb. 7, 2020, at Fresno’s William Saroyan Theatre.

“We’ve been wanting to come for years, and now it’s just like … it’s just so breathtaking to see it in person—it’s just mesmerizing. It’s amazing, I’m speechless!” said Annie, who plays the flute and the oboe.

Joy was also overjoyed about finally being able to see the long-awaited performance:

“It’s absolutely amazing. The color and just the culture within the dance is incredible to watch. So, I’m very excited, as this is our first year coming,” said Joy, who plays the clarinet and saxophone.

New York-based Shen Yun takes audiences on a journey through 5,000 years of ancient Chinese culture, through the universal art forms of music and dance. China was once known as the “Middle Kingdom,” and was said to have its culture imparted by the divine. Shen Yun seeks to revive this divinely inspired culture and share it with audiences worldwide.

Through the expressive form of classical Chinese dance, Shen Yun dancers are able to express and portray a wide array of emotions, stories, and characters —even though no words are spoken.

“I think it is amazing, even though many of us don’t speak the language, we’re still able to really all connect because of the dance and music, and so to me, it’s something so special,” said Annie.

Being musicians themselves, these sisters could appreciate the hard work and effort gone into Shen Yun’s performance to make it flawless and harmonious.

“They’re amazing, I applaud them for the dedication,” said Annie, who added that she follows Shen Yun on Instagram so she has seen the behind the scenes work that goes into the performances.

“I just applaud them, it’s amazing. You just don’t see that dedication and hard work anymore,” she said.

“I think people forget the musicians, and they’re phenomenal. I think we get intrigued by the dancing, but there’s musicians down there,” said Elaine. “I applaud them as well.”

The music of Shen Yun is especially unique, as it combines a classical Western orchestra with traditional Chinese instruments.

A Christmas Present to Remember

The Rubio family was in awe of the traditional Chinese culture that unfolded before them on stage, in all its glory and vibrant color.

“It is just beautiful. It’s something that I think a lot of people can just enjoy and just the color, you know, it brings to life just so much history and culture to a point where anyone, no matter what their background, they can just enjoy it, and just be fully immersed in it,” said Annie.

Annie especially appreciated the ancient Chinese culture, because living in America, which is still a young country (compared to China’s 5,000 years of civilization), that type of rich history is not something one can experience often.

“Just the sheer magnitude of the span of time that the culture has gone through, and just the testament of all of these periods of history, it’s just amazing to see it all come to life through the dancing,” added Annie.

Fernando was amazed by the spectacle of Shen Yun, finding everything from the colors on stage, to the costumes, to the background pleasant to the eye. His favorite attire was the flowing “water sleeves” worn by the female dancers in a graceful dance where their long sleeves serve as props.

Many of Shen Yun’s performance elements are one-of-a-kind, and its backdrops that employ digital projection are patented. This element is always a standout feature to audience members—and this family was no exception.

“I like how the background is coordinated with the costumes, so it’s very pleasant to the eyesight, and then there’s the dancing—and it’s amazing,” said Fernando.

Elaine said the water sleeve dance was her favorite, too, and that she was even going through the program book with her family, marking their favorite pieces so they can talk about them later.

“I loved the surprises, like when they incorporated the video backdrop into the dance and then they become one,” said Elaine, who also added that she loved how each dance was so distinct.

Elaine said that after looking forward to it for a long time, Shen Yun had been a great Christmas present for her and her family.

With reporting by Lily Yu and Grace Coulter.