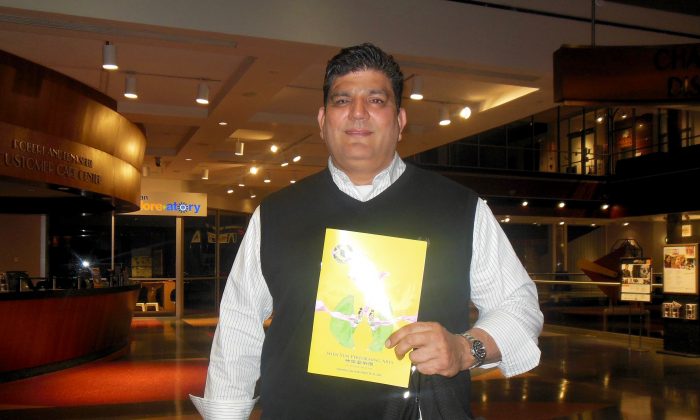 CHARLESTON, W. Va.—Astounding enough is the fact that Shen Yun Performing Arts—a full dance and music company with four equal sized groups that tour to 100 cities every year—travels with a full orchestra.

Even more astounding was, for audience member Mike Allen, the plethora of foreign instruments embedded into the otherwise classical Western orchestra.

“I saw a lot of instruments, and heard a lot of instruments that I have never heard,” said Mr. Allen, security director at the casino Mardi Gras. Without any hiccups, he said, with not a single beat missed, the orchestra and classical Chinese dancers worked in tandem and perfect harmony.

Beyond the striking Chinese pipa and two-stringed erhu seated in the center of the orchestra pit—each with their own unmistakable Chinese sound profiles—there was a handful of Chinese percussion instruments, subtly there and crucial to the distinctly Chinese melodies of the original compositions, but overlooked by many but the most curious of listeners.

The “pengling,” or hand bells, look like two small cups connected by a string. The bells have no defined pitch, as Shen Yun’s website explains, but create a clear and reverberating sound when struck together. The sound is often associated with Buddhist meditation, though it is used with folk dances and traditional Chinese opera as well.

The “qing,” or chime bowl, is one of the most ancient instruments and considered an auspicious symbol.

There is also the familiar gong, which is also of Chinese origin but has developed with large variety and is commonly seen in many orchestras. Shen Yun sometimes uses a Chinese gong one to two feet in diameter, to enhance or accentuate certain instances in music, or to express sacred solemnity. There is also a smaller and thinner hand gong that produces a sound evocative of celebration.

The music was beautiful, it touched me.
— Mike Allen

Mr. Allen mimicked the sounds he heard, explaining what a new experience the orchestra was. The music of the performance had been one of the highlights in his experience.

“The music was beautiful, it touched me,” he said. “I just had a happy feeling.”

The performance also included bel canto vocal soloists, who sang original Chinese lyrics with piano accompaniment. That music, too, had a profound impact on Mr. Allen.

“It showed me about life … it left with a positive note that life is beautiful and enjoy life, basically,” Mr. Allen said. The songs, philosophical in nature, touched on themes like the meaning of life and creation, according to the program. It was so in Mr. Allen’s experience, and he personally related to those ideas.

“There was a lot of messages in there, like the creation, the theory of creation, which I thought was interesting,” he said. “How people need to get back to their original ideologies, you know, because of the world is going to a bad place.”

The world today shows a lot of greed and self-centeredness, or people not being concerned with their fellow man, he said. But Shen Yun was a reminder of the beauty of the world that we forget sometimes, he said.

“We get too busy, we get too caught up in cellphones or drinking, and we forget about the beauty of what the root of the world [is], and this is what it shows me,” he said.

“It is something that you have to experience because it is unlike anything I have ever experienced as far as a show,” he said. “The essence of the show is … the unity of mankind.”