Music Expert on Shen Yun: ‘That’s the magic, everything coming together’ 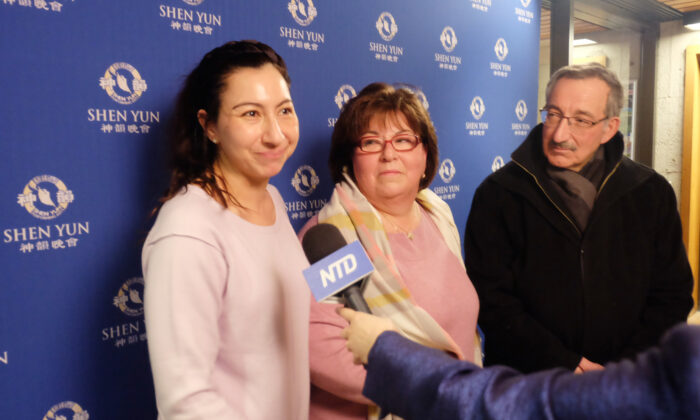 HAMILTON, Canada—On the final day of 2019, theatergoers in Hamilton, Ontario, got ready to welcome a brand-new year with a classical Chinese dance performance by Shen Yun Performing Arts. It was a full house at Hamilton’s FirstOntario Concert Hall on Dec. 31, 2019.

“Shen Yun’s music blew me away. It was something that was so true to the Chinese culture. And I love the way they blended the Western instruments with the Chinese instruments. I think the music on its own was dynamic, and then to have that coupled with the performance of the colors and the movements. It could not have gotten any better. The music was beautiful!” Macaluso said.

“It was fantastic. [Shen Yun] is something we’ve been wanting to see for a very long time. We finally got an opportunity. Welcoming the new year was a very special way of doing it and it was more than what we were expecting. Everything was very special,” she added.

Shen Yun’s seven touring companies travel the world with all-original compositions each year played by live orchestras. These orchestras combine Western orchestration with Chinese instruments and melodies, to produce a harmonious effect that’s unlike any other.

Transported by Music at Shen Yun

“I thought it was dynamic. It was so beautiful. What was happening on stage was stunning, but I was swept away by the music,” Macaluso said. “The music really transported to you to a whole other place. I was sitting here in Hamilton and yet I felt that I was swept thousands of years away to a place in China.

“It was top quality music. You could tell the performers are at top of their game. Everyone performed so well, and it was dynamic, the composition and also the execution of the performers. And the conductor did a phenomenal job! I really cannot say enough about it.

“I think anyone who loves live music and has an interest in other cultures, the music really is a way of transporting you and giving you the opportunity to experience that.

“I liked the way that the Western instruments were combined with the Chinese instruments as well. It was a beautiful combination of sound, yet being very true to the Chinese culture,” said Macaluso, who taught different cultures’ music, including Chinese music, to undergraduates during her time at York University.

Macaluso pointed out the erhu, or the two-stringed Chinese violin, and its ability to sound like the human voice.

“There was one part where the dancers came on stage and they were pretending to yawn, and it sounded like they were actually yawning. It was the instrumentation that created this very human sound, that was wonderful,” she said.

The evening’s program included a solo performance by soprano Min Jiang who sang a piece titled “Words of Encouragement.”

“[Jiang] was dynamic. Her register was really stunning and the clarity with which she sang was very beautiful,” Macaluso said.

But Macaluso didn’t only notice Shen Yun’s music and song. The group’s mission is to revive China’s 5,000 years of authentic Chinese culture, including the self-refinement that is one of China’s rich traditions. Macaluso picked up on this, too.

“You can feel the authenticity and a real sense of commitment to what they are doing. I watched them and I thought, you can’t do that kind of dancing unless you truly have it in your heart and you are devoted and passionate. And when you are passionate about something, that comes through, just as when you are sincere, that shines through. So, yes, I could feel that too.

“I think [Shen Yun] really opened my eyes to culture and history, and how even though something may have happened many, many years ago, we can still keep it alive through the arts. That’s important to do, absolutely.

“And I think the way it’s done at Shen Yun, it’s done in a very exciting way so perhaps people who don’t know much about the history or maybe they are of the Chinese culture and they don’t know as much, it might inspire them to learn even more of their roots,” she said. “And we are not of Chinese background, we love the culture, what it brought it to life for us. … And what a beautiful way of doing that through Shen Yun.”

“Something that stood out for me was the integrity. And not only a trait for ourselves individually but also being the integrity of culture and integrity of history, honoring those traditions as well,” Macaluso said.

“And so that’s something that came through to me through the majority of the dances as well, whenever you saw conflicts, there’s always, there’s also a sense of redemption too. And again going back to integrity, who you are at your core.”

With reporting by NTD Television, Xinxin Teng, and Brett Featherstone.