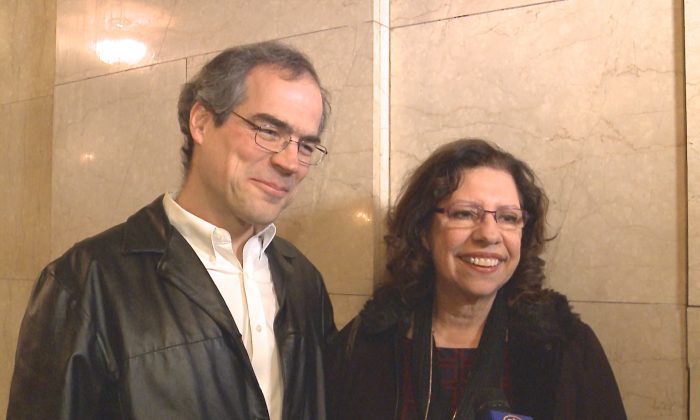 Mr. John Richetta and Ms. Augusta Riberio attended the performance and felt inspired by the new experience of 5,000 years of Chinese culture coming to life on stage.

Based in New York, Shen Yun was established in 2006 to revive traditional Chinese culture through the performing arts.

As an engineer of digital musical instruments, Mr. Richetta had a keen ear for the music of Shen Yun, which blends the sounds of East and West.

“I’m always inventing music in my head,” Mr. Richetta said, and the unique instrumentation of Shen Yun’s orchestra had inspired him. Mr. Richetta had thought about incorporating instruments like the two-stringed erhu or Chinese pipa before, but it was nothing compared to what he heard in the performance.

“Some people may imagine that you can’t do very much with it, but of course that’s not correct,” Mr. Richetta said of the erhu. With only two strings, erhu virtuoso Mei Xuan had amazed in audience in Boston.

Mr. Richetta explained how strong of a resonance the instrument had in certain parts of its register, and that it’s a “very expressive sounding instrument. Very vocal in its quality.”

“It’s very nice, very interesting,” he said of the music.

Ms. Ribeiro, a program manager, found the stories and themes to be both touching and educational.

She recalled the story of the magical boy Ne Zha, who fought an evil dragon, and noted the theme of good versus evil in the performances. “It was almost like a superhero type of thing,” Ms. Ribeiro said, adding that it was educational as well. “I think children probably enjoyed that a lot. I liked that.”

Also seeing Shen Yun for the first time was Ms. Marie Cassidy, who had wanted to attend a performance for years and finally got the opportunity.

“I am thrilled,” Ms. Cassidy said. “It is absolutely marvelous, beautiful, graceful, more than I expected.”

What had exceeded Ms. Cassidy’s expectations was a sense of spiritual fulfillment beyond the visually beautiful elements she saw.

“I came today to be inspired, and I certainly feel that I am,” Ms. Cassidy said. “I can sense a higher level of thinking.”

The scenes of heavenly palaces and celestial realms had added to that, Ms. Cassidy explained, but the performance itself had been put together with that high level thought as well.

“There is certain feeling of spirituality and largeness of the world,” Ms. Cassidy said.

Ms. Cassidy said she saw the elements of truth and tolerance in the performance in a beautiful way, and felt it was something the world could benefit from.

The costumes had captivated Ms. Cassidy as well, who noted the wide variety of garments the dancers wore and how she would have liked one of each.

Every year, Shen Yun puts on an all new performance with hundreds of costume pieces that come together to give the audience a sense of authentic traditional attire.

The costumes range from the attire of the various ethnic minority groups of China to the traditional Han clothing said to be inspired by the heavens.