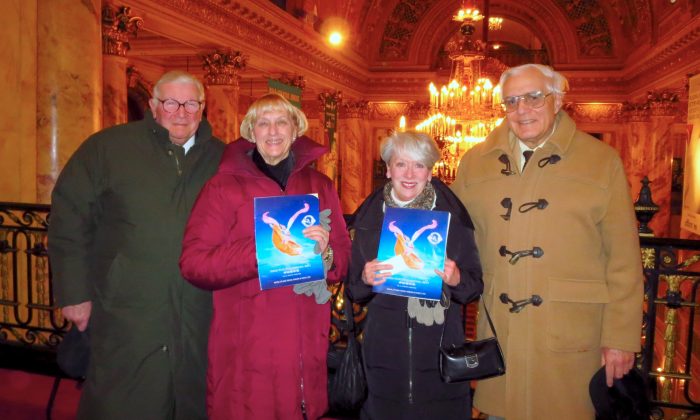 BOSTON—Gene Schott, a museum director with a lifelong dedication to not only preserving history and culture but also to teaching and keeping it alive, identified with Shen Yun Performing Arts’ mission to revive 5,000 years of Chinese culture.

He and his wife, Judy, a retired teacher, saw Shen Yun at the Citi Wang Theatre in Boston on Saturday. Shen Yun, based in New York, tours the world with a display of traditional Chinese dance, music, legends, and more.

Mr. Schott used to teach some Chinese history and culture, though he is now the executive director of the Green Briar Nature Center in East Sandwich, Mass. A museum’s primary role is to educate the community, he emphasized in a post on CapeCodLife.com. He created educational programs for Heritage Plantation, another museum in Massachusetts where he worked for 24 years and served as director.

“A lot of people don’t realize that during the Tang Dynasty [618–907 A.D.], China was probably the greatest power on Earth,” said Mr. Schott after the performance, noting the great role China’s culture and advances have played in world history. He said he has always been fascinated by the spiritual aspect of Chinese culture, the way Taoism and Buddhism spread and inspired the East.

Chinese culture is said to be divinely inspired, and Shen Yun revives this spiritual element, which was nearly lost under the atheist communist regime in China particularly the Cultural Revolution of the 1960s.

Shen Yun’s website explains: “Mortals and divine beings merge on stage as one. Principles such as benevolence and justice, propriety and wisdom, respect for the heavens, and divine retribution, all come to life, washing over the audience. Originating from Confucianism, Buddhism, and Taoism, these ideals are the essence of traditional Chinese culture.”

“It was spectacular,” Mr. Schott said of the performance. “I thought it was great. I really enjoyed the music, I enjoyed the dancing.”

Ralph Babusci, a retired federal worker, and Paula Moussally, a homemaker, attended the performance with Mr. and Mrs. Schott.

Shen Yun features award-winning classical Chinese dancers. Classical Chinese dance has been used for thousands of years to tell the stories of this ancient culture. It has developed over time into a rich dance form imbued with great meaning, as described on the Shen Yun website. Each movement is expressive of the dancer’s inner feelings and of the emotions conveyed by the story.

The dance forms of some of China’s 50 ethnic groups are also included in the program, each carrying with it that ethnic group’s unique characteristics.

Ms. Moussally said: “I just know it was a wonderful performance. I would highly recommend it to anyone to come, because it’s educational, and it’s spectacular with the wonderful lighting and staging and all the various elements.”