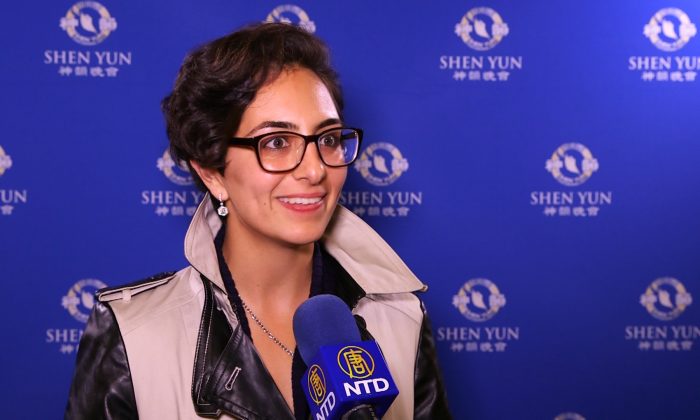 ESCONDIDO, Calif.—Lillygol Sedaghat, a multi-media storyteller for National Geographic, was enthralled with Shen Yun Performing Arts at California Center for the Arts in Escondido, Calif., on Feb. 7.

“It was wonderful, absolutely marvelous,” she said. “Very beautiful.”

Based in New York, Shen Yun was founded in 2006 with the goal of reviving the traditional, divinely-inspired culture of China.

As a storyteller who researches, writes, and creates her own stories, Sedaghat loved that Shen Yun uses so many different types of “universal languages” to share its both ancient and modern message, such as music, dance, vibrant colors, an interactive digital backdrop, as well as narration by the event’s emcees in both English and Chinese.

“They put all those together. People could understand the story in many different ways,” said Sedaghat. “There’s many, many different types of stories.”

Sedaghat said she gained a deeper understanding about Chinese history and culture, including various spiritual practices, the pursuit of scholarship, and people’s dedication to their craft.

“If you know a little bit of Chinese culture before, then there is a lot more that you pick up from it. If you’re new to Chinese culture, you also learn a lot of things, just by watching,” she said. “Spirituality runs very deep.”

Since Sedaghat also dances as a hobby, she said she was able to understand just how much Shen Yun’s dancers have trained to get to their level. She felt a special connection with the dancers’ movements.

“Movement is a language in itself,” she said. “So definitely as someone who appreciates dance, I really really appreciate it. … In the way that they move, you can tell they’ve spent countless years studying, understanding the foundation of movements, of expression, of muscle memory.”

She was especially impressed with the dancers’ spins and how they were able to balance things on their heads and even emulate animals like horses, saying it was “incredible, absolutely incredible.”

One of the dance pieces that stood out for Sedaghat was the Mongolian ethnic dance.

“The way that they move was so emulative, the way that people in the plains move, their lifestyle. And you can tell the Mongolian lifestyle in just the way they move their shoulders and their arms in constant motion. That was beautiful,” she said.

Sedaghat noticed the balanced blend of Western and Chinese instruments in the orchestra was “very unique and very, very powerful.”

Her mother, Fariba Sedagha,t also joined her at the Thursday evening performance, and she said she especially enjoyed the soprano soloist’s strong voice and the message in the lyrics of her songs.

“I love arts and I believe that through art people get connected. This is my first time watching this performance. I really enjoyed [it],” said Fariba.

To summarize her experience, Lilly Sedaghat said, “Marvelous. It was lovely. Thank you so much.”

With reporting by Sophia Fang and NTD Television.