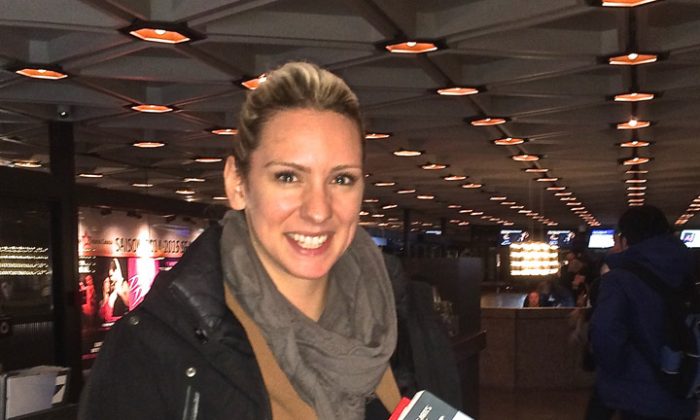 “It was just amazing, I was blown away,” she said on her way out of the theatre.

She and her parents had really wanted to attended the show after seeing the promoters selling tickets at the mall.

“It’s been a few years that I’ve been meaning to go and it just kind of worked out this time around,” Ms. Brosseau said.

“My son even loved it. He’s turning 14 in two weeks. He sat there with his jaw open the whole time. It was really great to see.”

Brosseau, a vegetarian, said she has a deep respect for traditional Chinese culture and its spiritual traditions like Buddhism.

“I came in with a lot of interest, not only for their culture, but also the dancing and the colours.”

Those colours are in Shen Yun’s costumes and digitally projected backdrops.

The backdrop offers vividly animated settings that extend the stage and transport the audience different realms, from vast rolling grasslands or Himalayan peaks in one dance to an elegant Tang Dynasty pavilion or a majestic heavenly palace in another.

The backdrop designs complement and synchronize with other aspects of the performances, including the characters, dances, and the colours of the costumes.

Those costumes are a spectacle of colour.

“Shen Yun’s costume artists collect countless designs of traditional attire, ranging from those of emperors, ministers, and generals to the everyday clothing of the common people,” explains Shen Yun’s website.

The dancers are backed up by a unique orchestra that has traditional Chinese instruments leading the melodies over a Western symphony orchestra.

“I really enjoyed it,” said Ms. Brosseau. She was a little far back, she said, “but it was still beautiful to hear.”

“I wish I was a little closer so that I could actually see the instruments, like the lady that had two-stringed instrument who did the solo.”

That instrument is China’s two-stringed violin, the erhu. The instrument has a 4,000-year history and is known for being incredibly expressive.

Shen Yun was founded on a mission to revive 5,000 years of divinely inspired Chinese culture, a history that has almost been lost after 65 years of forced atheism under China’s current authoritarian regime.

“I really liked the history, the colours, the dancing, the choreography, the orchestra. It was just beautiful,” said Ms. Brosseau.