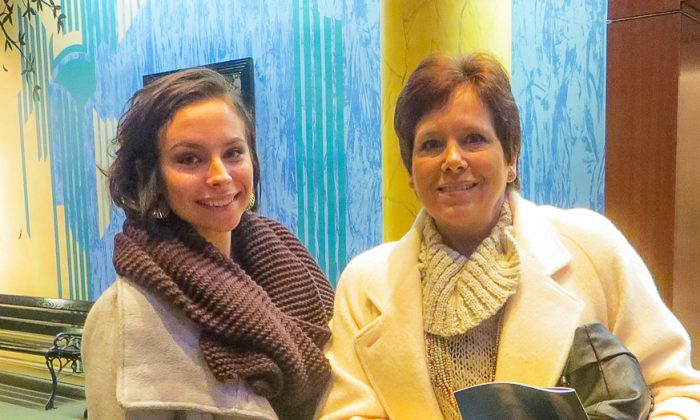 GRAND RAPIDS, Mich.—”It just touched my heart,” said Robin Sullivan, a nurse. She was referring to the spiritual nature of the Shen Yun Performing Arts Touring Company in its first of three performances at the DeVos Performance Hall. “It was good to see that it was being expressed openly—that it is an open platform,” she said after the performance on Dec. 29.

Shen Yun’s very aim is to bring an ancient Chinese civilization, a culture steeped in spirituality, to life. “Shen Yun weaves a wondrous tapestry of heavenly realms, ancient legends, and modern heroic tales, taking you on a journey through 5,000 years of Chinese culture,” states the company’s website.

And it brings the spiritual elements to life through classical Chinese dance, vocal soloists, and original orchestral music relying on traditional Chinese and Western instruments.

“I would hope that everyone could take it in and appreciate [it], even if they didn’t agree—appreciate what they were telling and sharing with us. I think it’s good to do that,” explained Ms. Sullivan.

She attended the performance with her daughter, Teddie Sullivan, in order to share some quality mother and daughter time. They thoroughly enjoyed seeing the performance together and both truly appreciated Shen Yun.

“It’s a little different than Christianity, which is what I follow, but I still was glad to see that they would express that and do such a beautiful job of it throughout the whole show,” she said.

“The spirituality was not limited to just the soloists,” she said.

Comprised of the world’s foremost classical trained dancers, Shen Yun was formed 10 years ago to bring these traditions and beliefs back. They were almost completely destroyed by the Chinese Communist Party’s rule, particularly during the Cultural Revolution.

One of the dances shows the current repression and persecution of a meditative practice in China.

That performance “raised awareness of [what] is happening in China today, and what the practitioners are going through,” Teddie said. Also, “it just raises awareness to be prepared for what could happen and then to offer hope and help to the people in China,” she said.

Ms. Sullivan stated that the performance was great. “I saw it last year too and it was really good, really really good,” she said.

Her daughter chimed in: “It was very beautiful. It was very vibrant and bright and I liked it.”