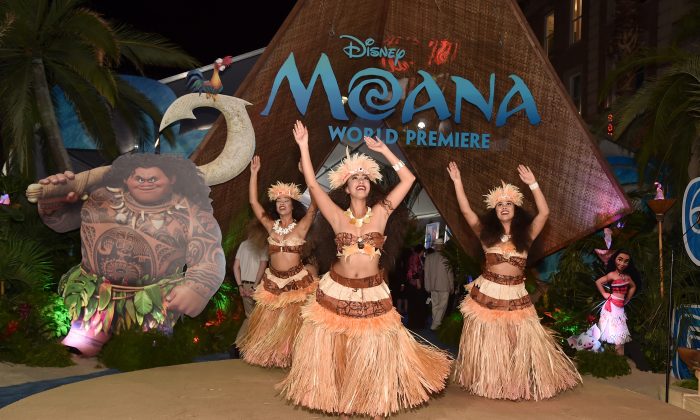 A view of the atmosphere at The World Premiere of Disneys "MOANA" at the El Capitan Theatre in Hollywood, Calif. on Nov. 14. (Photo by Alberto E. Rodriguez/Getty Images for Disney)
Entertainment

‘Moana’ a Celebration of Traditional Culture

If you’re looking for the next film worthy of taking the entire family to the theater, look no further than “Moana,” a warm, dazzling, and magical CG animated film from Walt Disney Studios.

On Monday, Nov. 14, the world premier of “Moana” was held at AFI Fest at the El Capitan Theatre in Hollywood. The red carpet gala was attended by stars Dwayne Johnson, who plays the voice of Polynesian demi-god Maui, and Auli’i Cravalho, a Hawaiian who plays Moana – the teenage daughter of an island chief – who chosen by supernatural forces for a special quest.

On Tuesday, the following morning, a crowd of lucky school children sat mesmerized throughout a special free screening of the film at the TCL Chinese Theatre. At the end, they broke into a cheerful round of applause.

“Moana” is the courageous tale of a young girl who sets out to correct a huge mistake made by Maui in the past. Unfortunately, she needs to convince Maui to help her.

The people of Moana’s island have also forgotten a significant part of their history, which Moana needs to learn to complete her quest, and she must defy her father and go beyond the safety of the reef surrounding her island. Challenges come not only from dangerous ocean waters, but also her moody, demi-god sidekick and kooky animal friends.

“Moana” hilariously pokes fun at the typical princess role in historical Disney movies, with Moana insisting she is not a princess. Maui counters with, “If you’re wearing a skirt and you’ve got an animal sidekick, you’re a princess.”

But the bulk of the film is a refreshing take on a traditional, cultural message of balancing one’s family and community roles with sometimes extraordinary responsibilities bestowed by the heavens. This results in the obvious, heart-wrenching difficulty of choosing to do the right thing, and it is handled excellently.

Some critics have voiced concerns about the appearance of Maui as a very large, nearly obese character, possibly perpetuating stereotypes of Pacific Islanders. Animation typically exaggerates the looks of its characters, though, and Maui’s massive size and obvious musculature helps the audience believe the amazing tales of how he helped humanity by pulling islands out of the sea.

The creators of the film also formed a group of cultural advisors from islands such as Fiji, Samoa, and Tahiti called the Oceanic Trust to help ensure the accuracy of “Moana.” The main cast of the film all have ties to the Pacific Islands.

The music of the film is beautifully done by Tony Award winner Lin-Manuel Miranda, Mark Mancina, and Opetaia Foa’i, especially the song “How Far I’ll Go” sung by Cravalho. Expect to leave the theater humming along.

Hopefully “Moana” audience members realize there may also be wondrous and magical things forgotten from their own culture’s history. Respect of a higher power and the laws of nature are traditions that exist within all cultures, not just exotic societies from far across the sea.