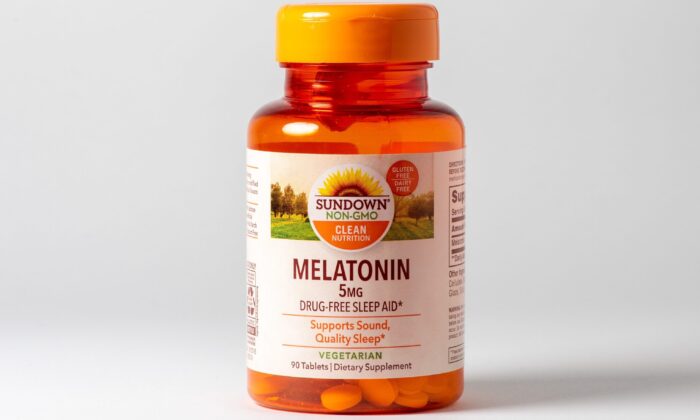 Melatonin’s multiple actions as an antiinflammatory, antioxidant, and antiviral (against other viruses) make it a reasonable choice for use. (AlessandraRC/Shutterstock)
Health

Two key studies have identified the role that melatonin plays in reducing the risk of a positive test for COVID-19 and lowering the incidence of severe symptoms.

That new finding adds to a list of benefits linked to melatonin since it was first discovered in 1958 by Dr. Aaron Lerner, a dermatologist who was able to isolate it from the pineal gland in a cow.

Scientists began studying melatonin in the 1980s, and by the 1990s, it received more attention. Research data showed that melatonin influences a number of bodily processes, including calcium-dependent metabolism, immune modulation, and tumor growth—which it can restrain.

Although melatonin is produced in a variety of tissues, the major source is the pineal gland, a tiny endocrine gland found in the center of the brain. One of melatonin’s initial functions is likely as a free radical scavenger. Interestingly, melatonin also functions in plants to reduce oxidative stress and promote seed germination and growth. The necessary precursor in plants and animals is tryptophan.

Your body controls the release of melatonin through a master circadian clock, located in an area of the brain called the suprachiasmatic nuclei.

This area synchronizes the secretion of melatonin through a complex pathway in the nervous system affected by the light input through the eyes. Since melatonin helps control the sleep-wake cycles, it became popular to use it to help control jet lag or support sleep.

Now data demonstrates that melatonin may be beneficial in preventing complications in people with COVID-19.

A study published in the International Journal of Infectious Diseases in October was initiated to look at the effect melatonin may have on adult patients with severe COVID-19 infection. They engaged 158 patients with severe disease in a single center, prospective, randomized clinical trial conducted in Mosul, Iraq, from Dec. 1, 2020, to June 1, 2021.

When the researchers compared the data in the control group to the intervention group, they found there was a significant reduction during the second week in thrombosis and sepsis in those that took melatonin. They also found that mortality was significantly higher in those that didn’t take melatonin.

Men made up 72.2 percent of the patients and the mean age was 56.3 years with a range of 32 to 78 years. Researchers split the intervention and control group with no significant difference in relationship to comorbidities that increase the risk of COVID-19, such as high blood pressure, asthma, diabetes, and heart disease.

At the end of the study, the researchers found there was a significantly higher mortality rate in the control group of 17.1 percent than in the melatonin group of 1.2 percent. Melatonin was administered orally.

The researchers declared that the results of their study signal a need to look closer.

“Given melatonin’s superior performance as a cheap, highly safe, and readily available medication, it is strongly recommended to be addressed in future studies.”

Those new findings support earlier research published in late 2020 that showed using melatonin was associated with a 28 percent reduction in the likelihood of a positive COVID-19 test. The researchers began the study to identify potential treatment modalities using network medicine methodology alongside clinical observations.

Network medicine evaluates cellular networks and the implications those have on disease and treatment. Network medicine seeks out potential drug treatments by looking at how diseases are linked at the molecular level. The researchers used artificial intelligence to compare genes and proteins of SARS-CoV-2 alongside 64 other diseases.

The list of health conditions included autoimmune diseases, pulmonary conditions, specific antibodies and cardiovascular conditions. From these conditions the researchers identified medications, including melatonin, from a list of categories that included antibiotics, anti-inflammatories, hormones, beta-blockers, and B2-agonists.

After identifying these drugs, the researchers used the information alongside data from nearly 27,000 inpatients at Cleveland Clinic. They adjusted for confounding factors such as age, smoking history, race, and a variety of disease comorbidities when they found melatonin use reduced the likelihood of a positive COVID-19 test by 28 percent.

Interestingly, when these same adjustments were made to a population of black Americans in the registry, the reduction rose to 52 percent. The study’s lead scientist, Feixiong Cheng, talked about the results in a statement from Cleveland Clinic:

“It’s important to note that this doesn’t mean people should start taking melatonin without first consulting with their health care provider. We’re excited about these results and to study that connection more, but large-scale observational studies and randomized controlled trials are essential to confirm what we’ve found here.”

Early in 2020, the Front Line COVID-19 Critical Care Alliance (FLCCC) developed preventive, outpatient treatment and inpatient protocols based on the insights of the founding critical care doctors. Dr. Paul Marik, critical care doctor at Eastern Virginia Medical School, also known for his work for improving the outcome of patients with sepsis, is one of those doctors.

Marik also used melatonin in the treatment of sepsis. He published a paper in the Journal of Thoracic Disease in February 2020 giving the scientific rationale for using melatonin to help regulate the oxidative imbalance and mitochondrial dysfunction that are commonly found in sepsis.

This was followed by a paper published in the Frontiers in Medicine in May 2020, in which he and a team of scientists published a therapeutic algorithm they used for melatonin in the treatment of COVID-19. They wrote, “Melatonin’s multiple actions as an anti-inflammatory, antioxidant, and antiviral (against other viruses) make it a reasonable choice for use.”

In June 2020, the FLCCC published a statement on the MATH+ protocol, stating it is “showing profound impacts on survival of COVID-19 patients.” An integral part of the MATH+ hospital treatment protocol is the administration of 6 to 12 milligrams (mg) of melatonin at night.

The group also developed an iMASK protocol for early outpatient treatment, which includes 10 mg of melatonin at night, listed under the category of anticoagulants and immune fortifying drugs. In a review of the evidence demonstrating the efficacy of ivermectin, the scientists wrote:

“Although the adoption of MATH+ has been considerable, it largely occurred only after the treatment efficacy of the majority of the protocol components (corticosteroids, ascorbic acid, heparin, statins, Vitamin D, melatonin) were either validated in subsequent randomized controlled trials or more strongly supported with large observational data sets in COVID-19.”

“Despite the plethora of supportive evidence, the MATH+ protocol for hospitalized patients has not yet become widespread.”

When the review was subsequently published, the mention of melatonin and this quote was removed. Another challenge for patients with COVID-19 is the development of long-haul symptoms, which one study from UC Davis showed affects at least 25 percent of individuals.

The team developed an algorithm to help physicians identify the type of treatment based on the patient’s symptoms. However, all patients are advised to use vitamin C, omega-3 fatty acids, vitamin D3, and melatonin.

Your body uses melatonin to help protect your overall health in several ways. Melatonin is best known for the relationship it has with your circadian clock. Although scientists are still discovering some of the benefits of sleep, it’s known that melatonin is an underlying regulating molecule for sleep.

There have been positive studies demonstrating the effect that melatonin has on disorders associated with dysfunctional melatonin rhythms, such as jet lag and shift work. Additionally, there is evidence of diminished production of melatonin in those with Alzheimer’s disease in the early stages. Poor sleep quality increases the buildup of beta-amyloid plaques that are integral to the progression of Alzheimer’s disease.

The discovery of the relationship between neurodegeneration and sleep offers a potential for using melatonin to promote healthy mental aging and in the treatment of Alzheimer’s disease in the early stages. Melatonin also helps regulate inflammation in the body, which has a significant impact on pain associated with rheumatoid arthritis and osteoarthritis.

One paper published in 2015 investigated the relationship between melatonin and multiple sclerosis relapses and found it meliorates periods of relapse. They discovered melatonin affects “T cell differentiation and ha[s] implications for autoimmune disorders such as multiple sclerosis.”

Melatonin helps to promote genomic stability, which may help explain why disruption of melatonin signaling has been found to promote the growth and metabolism of human breast cancer. The antioxidative and anti-inflammatory functions of melatonin have also demonstrated an ability to protect liver function and has an impact on fatty liver disease.

The range of effects that melatonin has on the human body is significant. A published research study in the Journal of Perinatology demonstrated that early administration of melatonin alongside hypothermia (whole body cooling) in infants who suffered asphyxiation during birth had a neuroprotective effect and ameliorated brain injury in the infants who received hypothermia and five daily enteral doses of melatonin.

While there are likely benefits to supplementing with oral melatonin, it also helps to optimize your body’s own production. It’s relatively simple and inexpensive, and at the same time, you will help to optimize your vitamin D levels. Optimizing melatonin production begins with getting enough bright sunlight during the day, since this helps to set your circadian clock.

As the evening approaches and the sun sets, you’ll want to avoid artificial lighting. Blue light from electronic screens and LED lights is particularly problematic and inhibits the production of melatonin. If you do need lighting, use incandescent light bulbs, candles, or salt lamps. The blue light from electronic screens can be counteracted by using blue-blocking software or wearing blue-blocking glasses.

My decision to personally use melatonin supplementation makes even more sense now that we understand that melatonin is not only produced in the pineal gland (which would benefit from circadian optimization), but also in our mitochondria. So, it appears that additional melatonin could serve as a useful adjunct in modulating your immune response.

Joseph Mercola
Follow
Dr. Joseph Mercola is the founder of Mercola.com. An osteopathic physician, best-selling author, and recipient of multiple awards in the field of natural health, his primary vision is to change the modern health paradigm by providing people with a valuable resource to help them take control of their health.