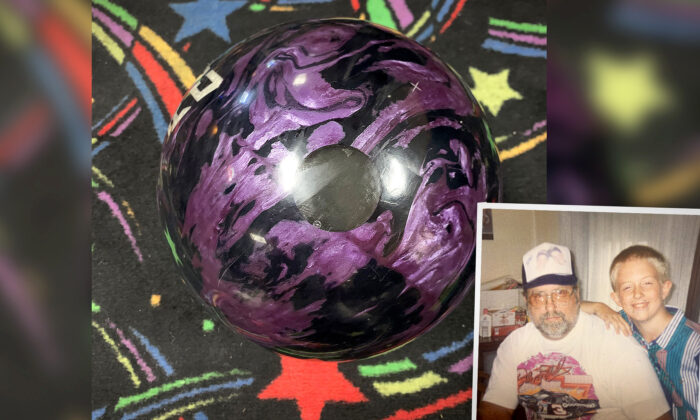 Illinois bowling champ John Hinkle is no stranger to a perfect game.

But recently, he bowled a very special 300 paying homage to his late father—with a custom ball of deep personal significance.

As a two-handed bowler, it’s illegal for Hinkle’s ball to have three finger holes, so he had the idea to fill in the thumb hole with his father’s ashes.

Bowling with tears in his eyes through the 11th and 12th frames, Hinkle recollected, “I couldn’t tell you where that last ball went, I had so many tears just throwing it.”

A Peoria Public Schools counselor, Hinkle became an NCAA bowling champion at Western Illinois University before continuing in the league—on the same team as his father and twin brother, Joe—for over 13 years.

It was John Hinkle Sr. who introduced his boys to the game when they were young.

“Every Saturday morning [our parents] would take us to bowl in our league, starting at the age of four,” Hinkle told ESPN. “As we got older, you would never see my brother and I bowl without our parents sitting right there supporting us.”

According to the brothers, it was their father’s wish to someday have his ashes placed inside a bowling ball. Eventually, Hinkle found the woman for the job, a childhood friend who opened her own pro shop at a nearby bowling alley.

It worked on the first try.

Hinkle told Fox News that he doesn’t like to try new things during tournaments; he waited until his team had won the league before giving his customized ball its first spin down the lane.

Hinkle’s father often finished games with a score of 298 or 299—but never 300. So, Hinkle’s perfect 300 on April 12 was a triumph—one shared by the entire family—and the brothers firmly believed their father was part of it.

“I can’t express what tonight means to me,” Hinkle posted on Facebook. “I just bowled a 300 with my ball I put my dad’s ashes in. He never had a perfect game until NOW.”

In footage of Hinkle’s 12th frame, he bowls a strike before dropping to the ground in tears. He and his brother Joe then embrace in celebration.

Hinkle planned to retire the special bowling ball to his trophy room after having bowled in the PBA Tour of Champions in May.