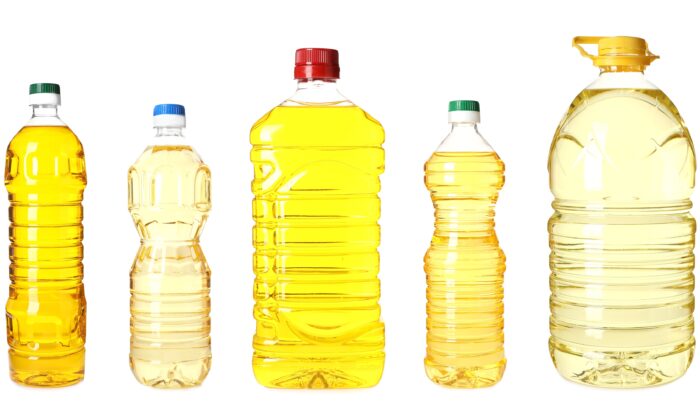 Knobbe’s published data show that seed oils, which were introduced into the United States diet in 1866, made up 32 percent of Americans’ diet by 2010. (New Africa/Shutterstock)
Mind & Body

The majority of Americans are being misled by official health recommendations to eat “healthy” vegetable oils. Even the term “vegetable oil” is misleading because it gives you the impression that you are receiving vegetable micronutrients when these oils are usually toxic, industrially processed seed oils.

Seed oils are a key ingredient in processed foods and some of the most dangerous “foods” you could eat.

This is even more of an issue today since the high amounts of oxidative stress these oils cause seriously impair your immune function and radically increase your risk of all infections, including COVID-19. In my view, eliminating all seed oils is every bit as important as optimizing your vitamin D level to decrease your risk of COVID-19.

At the Ancestral Health Symposium held at UCLA in August 2020, ophthalmologist Dr. Chris Knobbe gave an excellent synopsis of why seed oils are the unifying mechanism behind Westernized chronic diseases such as heart disease, obesity, cancer, and diabetes.

Knobbe is the founder and president of the Cure AMD Foundation, a nonprofit dedicated to the prevention of age-related macular degeneration (AMD).

While most have heard about the health risks of eating processed sugars, net carbs, and trans fats, seed oils surpass all of these in the damage they cause to your health. If you were to make one change today to lower your risk of chronic diseases, eliminating seed oils from your diet would be the highest priority.

Obesity? Same story. With a prevalence of just 1.2 percent in the 19th century, obesity increased 33-fold in 115 years, to a prevalence of 39.8 percent in 2015. By 1990, meanwhile, 24 percent of U.S. adults were diagnosed with metabolic syndrome, which is a combination of high blood pressure, dyslipidemia, insulin resistance, hyperglycemia, and visceral obesity.

Macular degeneration and osteoarthritis followed similar striking increases, with Knobbe asking the question of what was so ubiquitous during this time that could have prompted these changes. Dietary history provides the answer, with the introduction of four primary processed foods—sugar, industrially processed seed oils, refined flour, and trans fats—acting as the culprits.

“I believe this is a global human experiment for which no one gave consent. Nobody saw this coming. They wouldn’t have signed up for it,” he said. Knobbe also cites the work of Weston A. Price, the dentist who wrote the classic book “Nutrition and Physical Degeneration.” In the 1900s, Price did extensive research on the link between oral health and physical diseases.

He was one of the major nutritional pioneers of all time, and his research revealed native tribes that still ate their traditional diet had nearly perfect teeth and were almost 100 percent free of tooth decay.

But when these tribal populations were introduced to refined sugar and white flour, their health and perfect teeth rapidly deteriorated.

“Weston Price connected these foods, these very foods essentially, to physical degenerative disease in 1939. Nobody listened,” Knobbe said. Knobbe seems to be the 21st-century equivalent of Price.

The problem with seed oils is that they’re industrially processed, proinflammatory, and drive oxidation in your body. Health officials like to state that seed oils are great for you because they lower cholesterol, but as Knobbe says, so does arsenic. The two toxins actually have quite a bit in common:

“We may think this is a joke, but actually, incredibly, there’s many parallels between [arsenic] and seed oils, not the least of which is the fact that arsenic is fantastically oxidative, pro-oxidative. And this is exactly how seed oils get us. They drive the oxidation. They’re pro-oxidative, proinflammatory, and toxic, but of all of these, it is oxidation. That is by far the worst.”

You’ll find seed oils in most processed foods, including fast food and even many expensive restaurants.

“Even the finest restaurants are using seed oils because they’re about one-sixth the cost of butter,” Knobbe said.

The reason they’ve been able to remain in the food supply, despite their high toxicity, is because they’re not acute biological poisons but chronic ones. Chronic poisoning means symptoms don’t occur immediately and often only after repeated, long-term exposure. A solid strategy when eating at a restaurant is to avoid all the sauces and dressings, as they are more than likely loaded with these heavily processed seed oils.

“They were brought in slowly, beginning in the 1860s. And they were first used to adulterate lard and butter, and then gradually, they were used to supplant and replace lard, butter, and beef tallow. And that’s how they got away with this. And so we gradually became overweight and sick, and they’ve kept them in the food supply that way.”

In addition to being proinflammatory, Knobbe points out, these seed oil poisons are also:

One-Third of US Caloric Intake Is Seed Oils

Knobbe’s published data show that seed oils, which were introduced into the United States diet in 1866, made up 32 percent of Americans’ diet by 2010, which amounts to 80 grams per person per day. In contrast, in 1865, most people would have only about 2 percent to 3 percent of their caloric intake from omega-6 linoleic acid, found in seed oils, which would have come from primarily from butter, lard, and beef tallow.

Ancestrally raised animals had very low omega-6, but this changes when animals are raised in concentrated animal feeding operations (CAFO), the way they are today. CAFO pork may contain 20 percent omega-6 fats, for comparison. Knobbe highlights several native populations that have very low rates of chronic diseases and comparatively low consumption of linoleic acid, such as the Maasai Tribe of Kenya and Tanzania.

They eat primarily milk, meat, and blood—a diet that’s 66 percent animal fat (33 percent to 45 percent saturated animal fat), 17 percent carbohydrate, and only 1.7 percent omega-6 linoleic acid (LA). They have no heart disease, yet the American Heart Association continues to tell Americans to limit saturated fat to no more than 5 percent to 6 percent of daily calories.

Only about 1 percent of their diet or less is omega-6 fats, and they also have no heart disease and virtually no obesity or diabetes. “If we look at these populations,” Knobbe said, “and you can look at all of them, ancestrally living populations, what they don’t have is refined sugar, refined wheat, and of course they don’t have vegetable oils.”

“So what about the omega-6 LA in these traditional populations? It is 0.6 to about 1.7 percent, I think all are under 2 percent, to the best of my knowledge, where our Westernized populations—7 to 12 percent omega-6 linoleic acid alone. This again is the key takeaway point. So what happens to this omega-6? We accumulated it in our body fat.”

While ancestral populations have had their health protected by not consuming seed oils, other populations, like Japan, have had declines in health that correspond to increasing consumption of these toxic oils. Since 1960, Japan has had marked increases in obesity, high blood pressure, Type 2 diabetes, metabolic syndrome, multiple cancers, and age-related macular degeneration.

“That’s the main problem right there,” Knobbe said. “So Japan’s declining health is most likely due to a 13-fold, 1,200 percent increase in highly pro-oxidative, proinflammatory, toxic, and nutrient-deficient seed oils.”

According to the CDC, six in 10 Americans have a chronic disease, and heart disease, asthma, cancer, and diabetes have increased 700 percent since the National Health Survey was undertaken in 1935.

As tech entrepreneur Jeff Nobbs noted in a breakdown of the statistics, during this time, Americans have been smoking and drinking less, two of the primary drivers of chronic disease. Nobbs, too, believes vegetable oil is the missing link that explains why Americans keep getting sicker.

“If vegetable oil is indeed the hidden culprit behind today’s chronic disease epidemic, it’s an elegant and simple solution to explain why chronic disease and obesity continue to rise, even as we adhere to public health advice.

“I’m convinced that our wars against red meat, saturated fat, cholesterol, and sodium may be misguided. Fighting those battles may be like focusing on the sidekicks when the true villain pulling all the strings is still hiding in the shadows. It’s time to shine a light on that slippery villain, our possible public health enemy No. 1: vegetable oil.”

Prepare Your Food at Home

It’s vital that you reduce your intake of industrially processed seed oils as much as you can. This means eliminating the following oils:

To do this, you’ll need to avoid all ultra-processed foods, fast foods, and many restaurant foods. This is why it’s so important to prepare as much of your food as you can in your home so you know what you are eating and, in the case of seed oils—what you’re not.