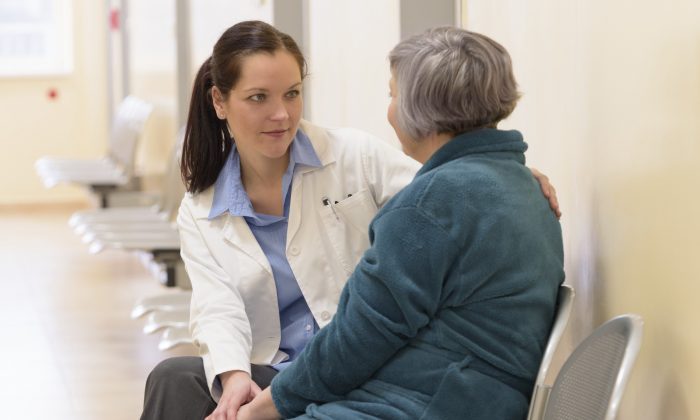 The interaction doctors have with patients is an active medical treatment that has a notable effect on patient outcomes—independent of any other treatment. (CandyBoxImages/iStock)
Health

Taking sugar pills works even when the patient knows they're fake: study
By Conan Milner

Americans spend at least $50 billion each year on back pain—and that’s just for the easily identified costs, according to the American Chiropractic Association.

Add lost income and lost productivity and the cost doubles—to $100 billion—according to estimates by the American Academy of Pain Medicine.

But we have long known that the mind can have a profound effect on our well-being. One study, published in the journal Pain in 2016, suggested patients will get effective relief with placebo medication—even if they are told it’s a placebo. A placebo is a sugar pill or inert cellulose tablet.

The findings have the potential to change our understanding of the causes behind the placebo effect.

Joint study author Ted Kaptchuk, director of the program for placebo studies at Beth Israel Deaconess Medical Center and professor of medicine at Harvard Medical School, says the findings have the potential to change our understanding of the causes behind the placebo effect.

And it’s much more complicated than just administering a sugar pill, Kaptchuk said.

“It’s the symbols, like the stethoscope. It’s the repetitive rituals like taking pills, and, very importantly, it’s the interaction between patient and a clinician who provides emotional support and mutual trust. Those are the active ingredients.”

Almost 100 patients with chronic low-back pain were selected for the trial and given a 15-minute explanation of the placebo effect.

Subjects were then randomized into one of two groups: treatment-as-usual and placebo.

Participants in the placebo group were given a medicine bottle labeled “placebo pills” with directions to take two capsules twice daily.

Participants in both groups were required to continue with their regular medication regimen during the three-week study period (mostly non-steroidal anti-inflammatories such as aspirin and ibuprofen; opioid users were not permitted to participate). They were not allowed to make any lifestyle changes, like starting an exercise plan, that would affect their pain.

The placebo group reported a 30 percent reduction in both usual pain and maximum pain level, compared to nine percent and 16 percent reductions, respectively, for the treatment-as-usual group.

Most of the placebo group said they were skeptical that the treatment would work, but by the end of the study, several participants requested prescriptions for the placebo.

In some cases, pain reduction was so significant, participants were convinced they must be taking a real drug. Three participants reported that the dummy pills “worked so well that it has to contain something.”

Do sugar pills really have the power to heal? It is more complex than that, said Kaptchuk.

The medical professional’s interaction with a patient plays a critical role, as the placebo effects show, he said.

A 2008 survey found that about 50 percent of a representative sample of 679 internists and rheumatologists gave their patients placebos when there was no effective treatment available. They did so because much of the time placebos make patients feel better, even though the American Medical Association’s policy on placebos says physicians may use placebos for diagnosis or treatment only if the patient is informed of and agrees to its use.

And, in practice, placebo deception may not be necessary, but Kaptchuk makes clear that it still plays a vital role in identifying effective remedies in drug trials.

“It tells you whether the drug adds something to the context of care in the provider–patient relationship,” he said.

This highlights the most important takeaway from Kaptchuk’s study: the realization that medicine is much more than drugs, procedures, and surgeries. In a world of evidence-based care, it’s easy to forget that the relationships and belief systems in medicine still hold substantial healing power.

It’s about activating self-healing properties that all human beings have.
— Ted Kaptchuk

“It’s about activating self-healing properties that all human beings have,” Kaptchuk said.

Four earlier studies have directly tested the effect of an open-label placebo prescription, and all indicated that the practice was beneficial to the patient.

The best of these studies was a controlled trial evaluating patients with irritable bowel syndrome (IBS). Like the recently published trial on back pain, the IBS study also showed significant benefits compared with no treatment.

Kaptchuk still wants to see these studies replicated with larger populations and played out over a longer period of time. But he hopes his work thus far helps doctors realize that placebos can be effective even if the patient understands what’s going on. He said some patients will likely appreciate the honesty and transparency.