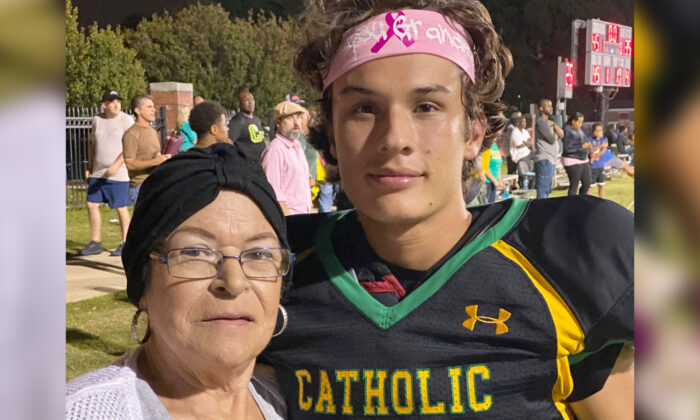 As the players of the Pensacola Catholic High School football team charged out onto the field for their final game of the season, one of them took a U-turn after emerging and ran up into the stands with a bouquet. This was 16-year-old Frank Calderon, who was running up to where his family was seated to deliver flowers to his surprised grandmother, Amparo.

This wasn’t just a sweet gesture but also him showing solidarity with his grandmother in her battle with breast cancer. “She’s always been there for me,” Calderon told ABC News. “She’s a strong woman. She’s beat [cancer] once. I think she can beat it again.”

The whole high school football team got behind Calderon, with the team wearing pink socks for cancer awareness. The emotional scene at the beginning of the game seemed to have helped the players’ spirit; they won against rival Choctaw High School 45-35.

Perhaps the most important part of the game, though, was when Calderon said “I love you, Grandma” and gave her a big hug, as she fought off tears. A video recording captured the moment, and it soon garnered major media attention.

After Calderon posted it on his Instagram account, ESPN Sportscenter saw it and made it go viral. It’s been viewed some 5.3 million times to date. “I see it as a great blessing,” the teenager told The Pensacola News Journal. “Every time someone sees it, I count it as a prayer for her.”

For the high schooler, it’s no exaggeration to say that his grandmother raised him. Born in Costa Rica, Frank’s family moved to Florida when he was just 4 years old. His grandmother was there to care for him throughout their journey from Central America to the United States. “Family comes first,” he told ABC News. “We’ve been close ever since I was born. She’s been there for me.”

It wasn’t long after the family moved that his grandmother was diagnosed with breast cancer. Frank was too young to understand it at the time, he said. His grandmother managed to overcome the disease but had a relapse in autumn 2019. Frank held onto hope that she could be there for his high school graduation day.

When it came time for the game against Choctaw, Frank’s high school football team had been having a phenomenal season and were undefeated. Knowing that his grandmother would be there for the last match, the young man talked to his mother, Karla, and his head coach, Matt Adams, and they came up with the idea for the surprise flowers together.

“[J]ust knowing that I could do that for my grandma meant the world to me, and I know it’s something I would never forget,” Calderon said.

“He loves his grandmother very much,” coach Adams said. “He is loved back by many and is a great kid that cares about everybody.”

Frank’s dad, Bryan Calderon, describes feeling “blessed” to have shared in the touching experience. Frank’s mother added, “Our family is so thankful for the prayers and good wishes.”