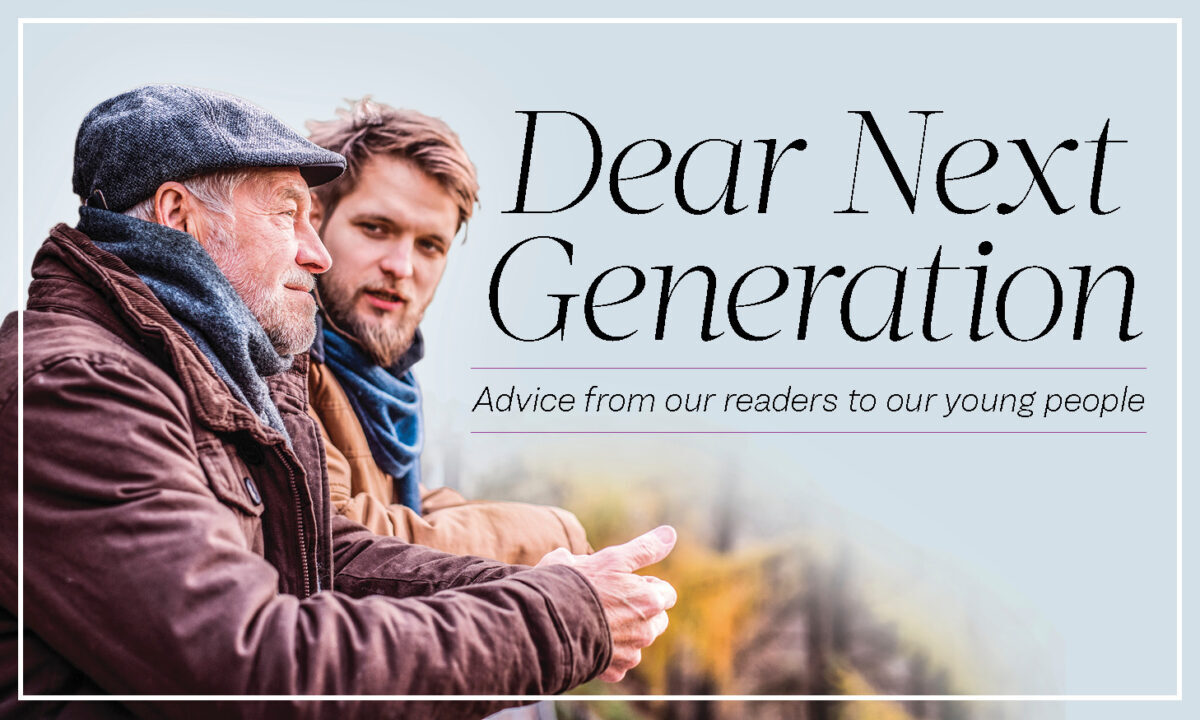 Readers give advice to young people in the "Dear Next Generation" column. (Photo by Shutterstock)
Family & Education

BY Dear Next Generation TIMEOctober 20, 2020 PRINT

I just came across a speech I gave at a campaign event 4 1/2 years ago about the evils of socialism. It needs repeating since it fits the present. I lived through Hitler’s and Stalin’s socialism and often wonder how I sustained myself. Even as a very young girl in the 1930s, I knew that my beloved homeland was drastically changing. My memories from that period are chilling especially as I correlate many developments I witnessed to those ongoing in the United States.

During the 1930s, my father was a railroad administrator—a highly-regarded position at the time, and he was being pressured to join the “Party.” Noticing that representatives of the Party included thugs in brown shirts smashing windows and vandalizing businesses (Black Lives Matter?), he declined. Eventually, he was ordered to participate for two months of “reeducation.” He returned home in an ambulance, never to recover from the beatings and torture he had endured at the hands of Party operatives. He died shortly after. His last words to me were: “Do not give in. Never give up.”

I recall being 14 years old and needing dental work. After a painful operation, I boarded a streetcar with gauze in my mouth. A cowardly Schutzstaffel (SS) agent punched me in the face, knocking my teeth out. He heard me talk about my father’s demise and vilifying the “Party,” so he made me pay the price for my speech. No one was spared from physical abuse by the SS or the brownshirts—young or old, male or female, all were fair game for assault.

In the years that followed, my wonderful homeland fell prey to poisonous socialism that hid under the name of National Socialistische Arbeiter Partei Deutschlands or National Socialism. (Italy called it Fascism.) Party members would enter German schools (even private or religious) and tell the teachers that they would adopt a universal national curriculum (Common Core?).

My brother was drafted into the military at the age of 15 years old. I was forced out of college to enter into service to direct and trace munition trains destined for Russia (They had to use young girls for this task since all men were on the “Russian Front”). I got to see Russia under the dictatorship of the murderous Stalin and what socialism did to that country. I saw bodies hanging from lamp-posts along the Dniepr River’s edges (Ukraine)—not from nooses but from hooks in their necks. They were dissidents to the regime (brown or red) and were left hanging … I saw many, many trainloads of Jews and dissenters being sent to reeducation camps, which had devolved into concentration camps in 1940 for the purpose of “population cleansing.” It is for those poor souls that I share my life story—to always remember and perhaps awaken others to the dangers of socialism and its derivatives.

We had no freedom and neither had the media. They had to publish what they were told, such as the number of Allied planes the Germans supposedly shot down daily (in their dreams) and how well the war in Russia went!

One day, a frantic neighbor came on his bike to our house announcing that he had an American in his barn and he could not communicate with him. Would I please come and help. It turns out his plane was shot down by the German Flak. It took seven weeks to get him back to Great Britain. We stayed in touch, he came back, we were married, and here I am! I became an American citizen, embraced my new country, my anthem, my flag, my Constitution. When I voted for the first time I wept with joy! I love my country for all its glory with all its imperfections.

It is for many of these reasons that I am adamant the “Silent Majority” be silent no longer, and that the younger generations educate themselves, learn from the past, and appreciate their God-given country!

Keep short records of when someone wrongs you. You’ll be more healthy. A favorite quote says: “To err is human, to forgive is divine.” It is more blessed to give than to receive. Find a homeless shelter or a local family to help. Write an encouraging note to a widow. Laughter (even medical professionals agree) is medicinal. In fact, learn to laugh at yourself! Don’t waste your laughter on a “tee hee.” Practice a belly laugh!

When a loved one dies, their memory doesn’t die with them. Grieve, yes. In your grieving, rehearse those fun and poignant memories. Now go make your own memories. Please don’t think it costs a lot of money to make a memory. I will never forget the first time my husband took our sons (7 and 9) fishing. They were gone all day and into the evening. I looked forward to dozens of fish being photographed. They arrived, sweaty and grinning from ear to ear. One fish. One day of making memories.

“Grandparents sort of sprinkle stardust over the lives of little children.” —Alex Haley

I retrieved these profound thoughts from a column by Rabbi Gellman. One of his readers asked him this question, “What would you say in your final moments?” While it may be rare that young people ever think about their final moments, there is a valuable lesson in this story.

At a bar mitzvah being conducted at Rabbi Gellman’s synagogue, it was, and still is customary, for the rabbi to call upon the parents and grandparents to bless the child in their own words. The diminutive grandfather, a Holocaust survivor, rose from his seat, approached his grandson, looked up at the tall 13-year-old, and in his thick Yiddish accent said: “In this life you are going to meet people who need help. If you can help them—help them.”

Then, according to Rabbi Gellman, he sat down and cried.

Imagine a culture where the dominant character traits are caring, compassion, kindness, gentleness, and self-restraint. If you want to change the world, remember the words of Seneca, “It is another’s fault if he be not grateful; but it is mine if I do not give.”