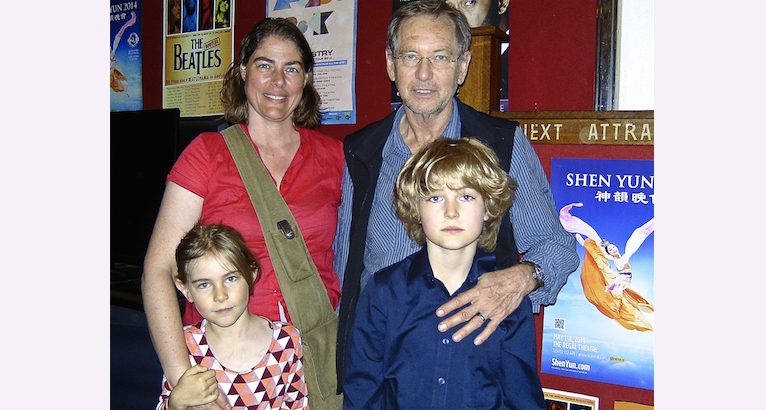 David Shoebridge and his wife and children enjoy Shen Yun Performing Arts at The Regal Theatre, May 4. [Courtesy of NTD Television]
Shen Yun

PERTH, Australia—Mining consultant David Shoebridge and his wife and two children were at the Shen Yun Performing Arts presentation held Sunday afternoon at The Regal Theatre on May 4.

According to the company website, the Western symphony orchestra with its energy and grandeur, and the ancient Chinese instruments with their distinct tones and styles, create a dramatic new sound, which appealed to Mr. Shoebridge.

Mr. Shoebridge was also particularly struck by the colourful display radiating from the stage. “The colours are actually very vibrant, you know more strong than I would expect from a Western set … There is a bigger range of colour, more colours here than I would expect as well.”

He and his wife were surprised to learn that Shen Yun was founded in New York and both were left questioning why Shen Yun could not perform on stage in China.

Mrs. Shoebridge, who is an engineer, thought the performance was lovely and though she felt intrigued in parts, she was left needing to learn more.

Mrs. Shoebridge said she was interested in the arts and the performance itself.

“Beautiful, absolutely exquisite and I loved the way that the Chinese dance gets humour involved, so you always have these characters. It’s beautiful.”

Both their children James and Emily enjoyed themselves too, even though their parents had to sit apart as they missed out on getting four spare seats together. As it was, they were only able to secure three seats so Emily sat in her mother’s lap.