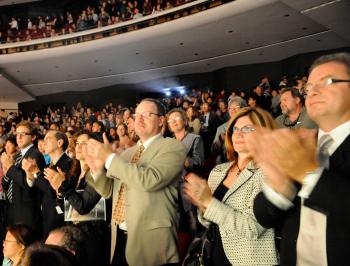 "It was a beautiful evening," said Nadia Potts, a former principal dancer with the National Ballet of Canada who teaches dance at Ryerson University. Ms. Potts described the dancers in the show as "ardent, passionate, and beautifully rehearsed."

"They do things with scarves and with fans and with drums, and I'm thinking: What next? And [then they use] shoes. And chopsticks. So it's very impressive."

Ms. Potts was invited to the show by friend Vanessa Harwood, another acclaimed former principal dancer with the National Ballet of Canada, who saw the Divine Performing Arts Chinese New Year Spectacular earlier this year.

Thursday night's was the second of six Mid-Autumn Spectacular shows performed by Divine Performing Arts. The run continues until Sunday.

The show provided inspiration for one of Canada's top fashion designers.

"Basically I'm stunned," said Dan Liu, creator of the Tatsuaki fashion line sold at Holt Renfrew. "The costumes are beautiful, and I loved them."

Mr. Liu has been named one of Canada's top-ten designers.

"They gave me a lot of ideas for my next collection. I'm going to design more like the Chinese style dress and outfits; they looked fantastic."

Mr. Liu said theatre costumes, since they're seen from far away, usually lack detail. But sitting in the front row at the Divine Performing Arts show, he said he could see intricate detail.

"The white with the purple, the red with the yellow and I can see the shiny blue with the green. So the colour is really contrasting and the colour is already telling people what the story is about. Plus I can see the detail, the little details they have; of course to me it's almost close to perfect."

He added, "They gave me a lot of ideas so tonight I'm going to go home and go back to my office and just close the windows, close the doors, and just start drawing."

Ms. Berger said that though she enjoyed the show the first time she saw it, she got more out of watching it a second time.

"I think the second time is better because you get a real sense of the history behind it and also the fact that so much has been influenced in modern times by this kind of dancing," she said, referring to explanations by the hosts that many elements of modern gymnastics and acrobatics had their origins in Chinese classical dance.

"I look at Cirque du Soleil and Cirque du Soleil is very similar to what was going on in this era with the dancing, the ballet, ice skating and of course all the athletic endeavors at the Olympics too — there's so much really that's contained in the dancing."

The show did not only amaze those in arts circles.

Alison Martin said the show was "very excellent, so rich in precision, exquisiteness, depth, peacefulness, tranquility, and calmness." The chief representative officer of a financial institution said she was left feeling "at peace."

"Just gorgeous," exclaimed James Trusler, the president and CEO of Platinex, a minerals exploration company, who came with his wife. "The costuming, all of the cultural aspects of it – very entertaining and quite pleasant."

"The music was fantastic blend of – may I say – Western music and Chinese melody. For me, for my ears, it was very nice to listen to; it was a good experience."

"The legends were impressive," he added. "We had love stories, we had war stories as well, and they were beautiful. You could understand them directly without having heard the stories before."

A number of politicians were also in attendance, including councillors from the cities of Oshawa, Vaughan, and Ajax.

The mayor of Caledon, Ontario said she found in the performance messages that could help young people in her town.

"You look at the Chinese culture and how they are so calm and happy and they are very gentle," said Mayor Marilyn Morrison. "So what is it about that culture that brings that out in people . . . we need to find out so that we can pass that on to the angry young people we have here."

The mayor said she would use an upcoming column in both of Caledon's local newspapers to tell Caledonians about Divine Performing Arts.

"I will encourage them to come in order for it to benefit more people in my community."