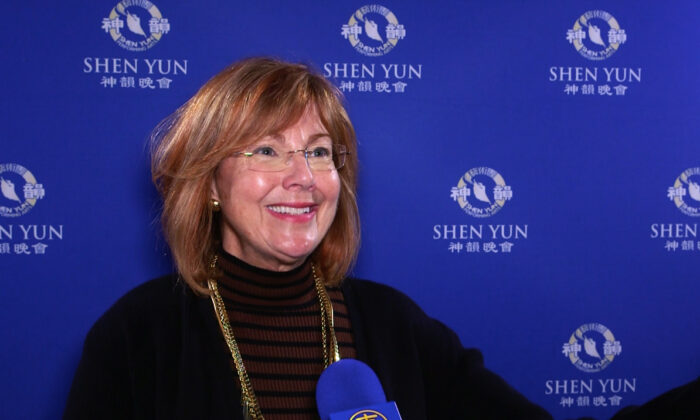 TUCSON, Ariz.—Professional voice teacher and singer Deborah Prischmann Gryniewicz came to Tucson, Arizona six years ago from Pennsylvania in search of warmer weather. But on Feb. 22, 2020, at the Tucson Music Hall, at the performance of Shen Yun Performing Arts, the former adjunct vocal professor from the University of the Arts in Philadelphia found so much more.

“I loved it. … I love the dancing, music, choreography for storytelling. I enjoyed the narration in between [the vignettes]. It really engages the audience. I thought that was brilliant. I even learn how to speak a little Chinese. And it was just absolutely very uplifting,” Gryniewicz said.

Love that instrument that they brought up on stage that sounds like a human voice in some aspects [the erhu].
— Deborah Prischmann Gryniewicz

The singer, who also composes and directs, gave special praise to the music of the performance, singling out the erhu solo for its similarities to the human voice.

“Very hypnotic, meditative—the classical style and the instruments were just beautiful,” Gryniewicz said. “Love that instrument that they brought up on stage that sounds like a human voice in some aspects [the erhu]. Being a voice teacher, you know, we have two vocal fold[s]. There are only two strings on the [erhu].”

According to Shen Yun’s website, “The erhu is incredibly expressive, capable of imitating sounds from chirping birds to neighing horses. An alto instrument with a middle-high musical range, its melodies can be tender or sonorous. In its lowest and middle range, the erhu is especially stirring and somber, a quality eminently suitable for conveying the grand pageant of China’s history and the emotions of its people.”

New York-based Shen Yun’s mission is to revive authentic Chinese culture through such highly-expressive art forms as classical Chinese dance and music. Unfortunately, this 5,000-year-old civilization was once almost lost due to a severe campaign by the Chinese Communist Party to wipe out the spirituality and principles of traditional Chinese culture, which the regime perceives as a threat to its own legitimacy and power.

Some of the roughly 20 vignettes that make up a Shen Yun performance depict an ongoing and violent component of that campaign of destruction: the persecution of spiritual believers.

Gryniewicz found these pieces to be enlightening and emotional.

“It opens our eyes to the persecution of the Chinese people, what they have to endure. Communism’s taken away such beauty, their past, their story. [Shen Yun] is not allowed to perform in China, which I find very very sad,” she said.

On the bright side, according to Gryniewicz, Shen Yun is reviving China’s true culture and raising awareness about it and its plight in today’s communist China. “It is beautiful. I’m all for that. I think it’s absolutely wonderful; it’s with the world do you tell their story. And it’s the China that we all don’t know about here in the West.”

“And I loved the projection on the screen. I noticed that is an innovation and that was truly amazing how the dancers would just float off into space and the horse just took off,” Gryniewicz said, referring to Shen Yun’s patented backdrop technology that allows the audience to feel that the dancers’ characters can fly through space and even enter other dimensions.