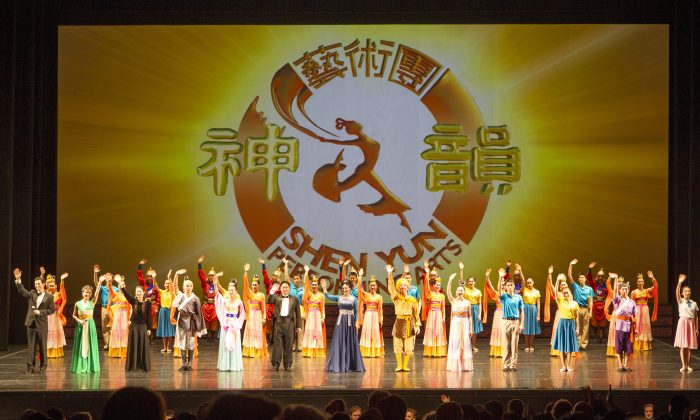 “It’s a great way to learn about Chinese culture,” Mr. Avila said. “I come from South America, so it’s completely new for us. We really appreciate the opportunity to see this type of show, sharing the culture.”

According to the company website, “Through the universal language of music and dance, New York-based Shen Yun weaves a wondrous tapestry of heavenly realms, ancient legends, and modern heroic tales, taking you on a journey through 5,000 years of Chinese culture.”

“It’s remarkable,” Mr. Avila said. “I think the connection between the spirit [is] something that we must develop around the world, and something that the world really needs today.”

Mr. Avila said the spirituality of Shen Yun’s performance was “remarkable”, adding that he appreciated “the connection between mind and body and the spirit” shown in the dances.

“And at the same time, it’s the happiness that the dancers and people showed,” Mr. Avila said. “It was great.”

“I’ve never seen anything so magnificent,” he enthused. “The actual structure and the technique – it was just a mind blowing experience to watch. You could see the hours of training, the way they set up the moves.

“You can see it – it’s ancient China coming back alive again. To actually experience something like this in our country [is] such a privilege and an honour.”

Mr. James said Australia is “very open minded towards all cultures” and Shen Yun holds a universal message that would be welcomed around the world.

“You can see it is a worldwide show; it’s not just something from China. You can tell something like this could book out anywhere it goes, to New York, Paris or London,” Mr. James said.

“It’s just a shame though that they can’t perform in China. You can see the message of wanting to bring the show to China and [I think] it would be so eye-opening to the Chinese, because I feel like it’s sort of opening up the past.”

According to the website, Shen Yun’s goal is “to revive the authentic and original manifestation of traditional Chinese culture and art.”

“On stage, Shen Yun performances bring back these traditional values that have sustained and created cultural expression for so many generations. The mere representation of this lost heritage and its virtues immediately, by way of contrast, unmasks the Party and its ideology of struggle,” it says. “This is why the Communist Party fears Shen Yun, and why this kind of performance cannot be seen in China today.”

Mr. James says watching the performance was “an amazing experience”. He appreciated the spirituality of the Chinese culture, conveyed by the Shen Yun performers.

“I can’t really explain … but you can see that they are a very, very spiritual people. And to leave something like that so dormant, it just grows on the inside, [until] eventually it comes out and explodes into something like this,” he said.

“The values are staying true to who you are and to your culture, and what you truly believe. No matter the circumstances, stay to your spiritual side and you stick to that path. I think that’s one of the messages of the show.”