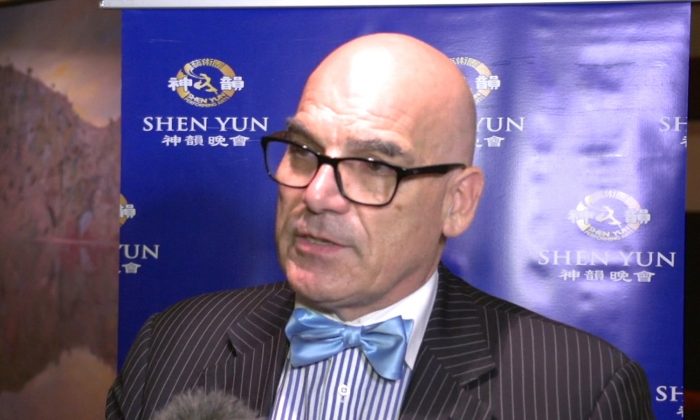 Melbourne Business Broker Will Carry Shen With Him Forever

“All the colour, all the spectacular, the nimbleness, the sound, the music, it’s just wonderful!” says Manny Spiteri, a Melbourne business broker who was part of the enthusiastic first night audience.

New York based Shen Yun uses, as the website says, “Sophisticated dance techniques, an orchestra joining instruments from both the East and West, beautiful costumes, and a stunning back drop—this is Shen Yun at first glance.”

Having a keen interest in China, Mr. Spiteri really appreciated how Shen Yun has encapsulated for him everything about China.

‘It actually brings together the physical buildings and the culture—the dance culture. It really brings it all together as a fullness.”

And the digital backdrops enrich that feeling of completeness and togetherness.

“It joins it all together! It’s the collaboration between the music, the dancers and the backdrop, the whole thing was brought together wonderfully, it was really really great and I recommend everyone should see it.”

But digging deeper Shen Yun is more – it expresses the foundation of traditional Chinese culture.

The Shen Yun website explains, “Mortals and divine beings merge on stage as one. Principles such as benevolence and justice, propriety and wisdom, respect for the heavens, and divine retribution, all come to life, washing over the audience.”

Mr. Spiteri is Maltese and believes that every country should preserve its own culture. He thought it was an unwinnable fight for the communist regime in China to try to destroy its rich cultural heritage.

You can take the soul out of the person but the soul is still in the person. And I think this tonight portrayed the Chinese culture.”

Mr. Spiteri said that memories of tonight’s Shen Yun performance will always stay with him in his future travels and will add so much to every future experience.

“When I walk … I’ll remember the dance.”