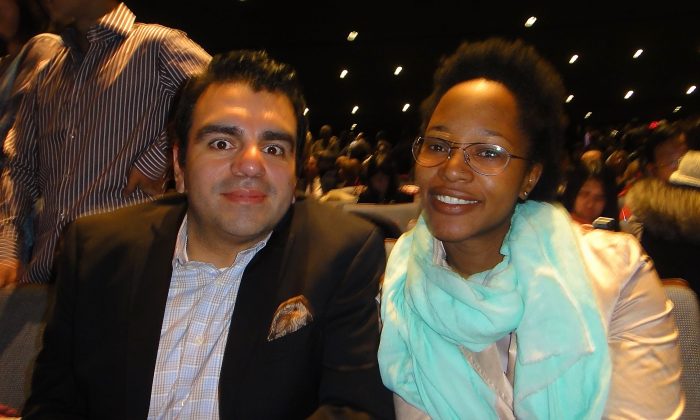 TORONTO—Husband and wife media managers Walder Amaya and Rachel Amaya Olive were looking forward to what came next at Sony Centre for the Performing Arts on Thursday.

It was the opening night for Shen Yun Performing Arts and they took a moment during the intermission to share their reaction to the classical Chinese dance production on the stage before them.

“I’m enjoying it immensely. I think it’s a fantastic way to create a very expressive culture over the multiple centuries. I just love the transition from the origins to modern, how it’s being presented. I think it’s very artistic and it’s fantastic,” said Mrs. Amaya Olive, digital media manager at Sony Pictures Canada.

Shen Yun captures 5,000 years of Chinese civilization, a history steeped in traditions like Buddhism, Daoism, and Confucianism. While much of China’s traditional culture has been systematically destroyed under the current regime, Shen Yun aims to revive it through the performing arts.

To that end, Shen Yun has four companies touring the world with an all-new production every year. For Mr. Amaya it was an impressive feat.

“Amazing, excellent. Choreography has been amazing. Athleticism I guess is the word I’ve been looking for. Just amazing and phenomenal,” he said.

Shen Yun is unique for its use of a digitally projected backdrop. The vividly animated scenes on the backdrop extend the range of the stage to bygone eras and heavenly realms. For a couple both working in the media, it was an element of the performance they both had something to say about.

“I loved the animation,” said Mr. Amaya, adding it complemented the work of the dancers.

Mrs. Amaya Olive said that visual element and how it worked in terms of transitioning parts of the dance and interacting with the choreography and dancers was exceptional.

“I think that’s a really creative and excellent way to portray the story,” she said.

“Very happy and excited to see the second half of the show,” she added.

“Exactly the same—really looking forward to the second half of the show,” agreed Mr. Amaya.