Mayor of Toowoomba Applauds Shen Yun: ‘We Are So Proud to Have You Here’ 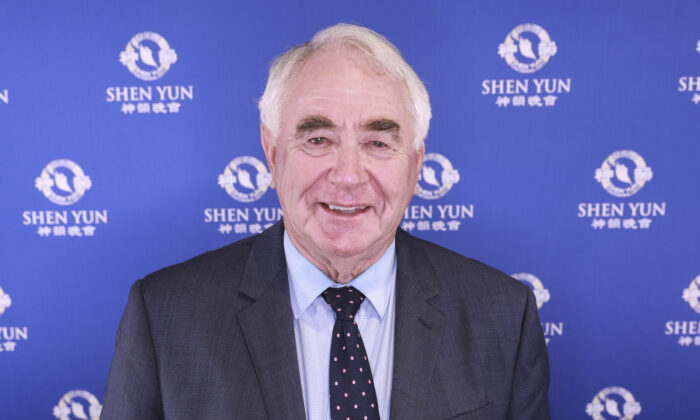 “It was an absolutely amazing night,” he said after attending the performance on May 3. “I congratulate [Shen Yun] on the standard. And of course our beautiful Empire Theatre here in Toowoomba has great value to us historically … and we are so proud to have you here.”

Mr. Antonio, who has been mayor of the Toowoomba region since 2012, praised Shen Yun’s calibre: “The standard tonight was so high and it was so entertaining … that’s the very reason the Empire Theatre tonight was packed.”

He described the Shen Yun experience as “surprising,” adding, “I could recommend it to anybody.”

Divinely-inspired, traditional culture flourished in China for 5,000 years, throughout which people transmitted timeless values such as loyalty, honesty, courage, and compassion, and upheld faith in the divine.

But since 1949, the Chinese Communist Party (CCP) has systematically destroyed and distorted China’s rich culture, cutting the country off from its deeply spiritual roots.

Floral designer Ms. Angela Jacob, who was in attendance on the same night, called the Shen Yun experience a “visual feast.”

Ms. Jacob has owned the Brassall Florist shop in Ipswich, Queensland, for over 30 years. She commented that one of the Shen Yun dances that features the plum blossom flower made her cry.

“I just love the colour. It was just beautiful,” she said. “The beauty of it just brought me to tears.”

“I think the colours and the fabrics are beautiful to the eye. The dance style as well is pretty special to watch; the elegance on stage is nice,” she said.

“Sitting in the audience I can definitely feel goosebumps and tingles running through me, and I think that in itself was part of the magic that you see, and what they’re creating on stage and how it translates to the audience,” Ms. Clark added. “I’m feeling the spirituality through that energy in the air, and what they’re giving off as well.”

Mr. Albert Vermeulen, who also found himself in the Shen Yun audience thanks to his wife who organized the trip, said he was impressed by the entire visual experience. Mr. Vermeulen is a doctor who specialises in the treatment of skin cancer.

“The choreography, the way it’s put together, the movements, the colour, the music, the way it flows, has been quite impressive,” he said.

Another audience member, Ms. Sarah Waters, repeatedly called Shen Yun “amazing” and expressed how all the elements of the performance worked together seamlessly.

“I just love how everything is in unison together, and the colour … you just can’t fault anything,” she expressed. “It’s beautiful.”

She said it wasn’t just the surface beauty of Shen Yun that she appreciated—she also expressed that she gained a deeper understanding of China’s traditional culture from watching the performance.

“The kindness and the caring that are being portrayed through it are lovely,” she said.

“There are aspects of this show that I’ve never seen, ever, in a stage show,” he commented. “I’m particularly impressed with the backdrop and how the backdrop becomes part of the action, where someone, who is not a real character, suddenly appears out of the stage and becomes real. I find that fabulous to watch.”

Shen Yun’s patented digital backdrop-stage performance interaction enables characters depicted in the dance pieces to effectively “travel back and forth between the stage and the animated backdrop,” the company says on its website.

“The newly patented effect limitlessly expands the stage, with the animated images appearing to be lifelike extensions of the performers,” it added.

“You must see this show,” he said, directing his message at anyone who has not yet seen Shen Yun.