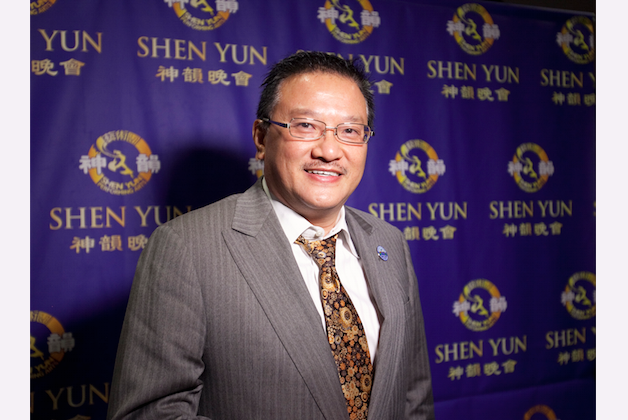 COSTA MESA, Calif.-“It’s eye opening. I am honored and privileged to be here,” said Mayor Michael Vo of Fountain Valley at the intermission of the final, sold-out performance of the highly celebrated Shen Yun Performing Arts New York Company at Segerstrom Center for the Arts on March 16.

Shen Yun includes a variety of short pieces that transport audiences through China’s 5,000 years of civilization replete with “ancient myths, bygone heroes, or celestial paradises. Whether set in the past or in contemporary China, every dance embodies traditional Chinese values,” explains the website.

Mayor Vo, born in Vietnam, was delighted to learn about the traditional Chinese culture that Shen Yun conveyed through the performance, and expressed the need to spread it to the Western world and the younger generation.

Shen Yun “is a showcase to the Western world,” he said.

“My children are born and raised here, so exposing them to this event, this show, to celebrate our culture, it’s really a need.”

He explained, “Because China is a very big country, and I know each region will have their own special dance, probably their own dialect, and because of that, they celebrate things differently. Maybe in older regions, like Mongolia, they are older, they have a vast piece of land, so the way they enjoy life is different. So I think there’s a need to showcase here, and I really enjoyed it.”

Independent and nonprofit, New York-based Shen Yun was established in 2006 by artists from around the world with the mission to revive China’s divinely inspired traditional Chinese culture through music and dance.

“Chinese dance is at the heart of what Shen Yun does. Known for its incredible flips and spins, and its gentle elegance, it is one of the most rigorous and expressive art forms in the world,” explains the website.

Mayor Vo was delighted by the performance, “the Chinese have a different form of dancing, and it’s really showcasing here. You see a different technique, and you really enjoy the different culture. … There are so many parts of China, and so many groups in China, that help to bring this show together. I really enjoyed it.”