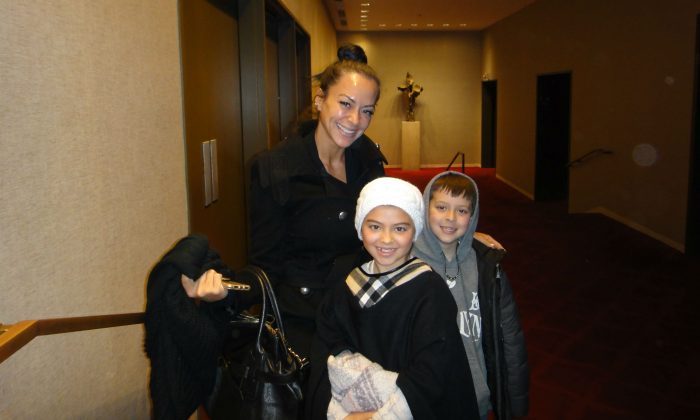 Her grandparents are from Hong Kong, but growing up in the United States LaGrega did not get the chance to experience authentic Chinese culture. So once she had her children, now aged 7 and 9, she wanted to change that. It’s important, LaGrega said, that her children understand the culture and history of this ancient civilization.

Shen Yun’s performance did just that for the family.

“It was absolutely beautifully done,” LaGrega said after watching the production on March 16.

Shen Yun Performing Arts is the premier classical Chinese dance company founded with a mission to revive 5,000 years of traditional Chinese culture. The New York-based company is in the midst of its 2019 world tour, wherein six equally-large contingents are travelling to over 130 cities across four continents.

LaGrega is a national master trainer and presenter who has traveled across the United States to provide training and workshops on health and fitness.

The personal trainer praised the skill of the dancers on stage.

But it wasn’t only the dancers’ physical capabilities that stunned the trainer, their personal energy also left a huge impression.

“Even though we weren’t on stage with them, you could really feel that connection through the dance with the music, and through all of their movements and facial expressions,” LaGrega said.

“You could really feel … when they felt that positive feeling and emotion, you could feel it.

Aside from a rigorous physical component, classical Chinese dance requires dancers to cultivate yun or bearing. This metaphysical component, unique to this dance form, is about being able to transmit a dancer’s inner world through their outward expression. Many of the performers thus focus on improving their character to ensure they are able to impart a feeling of positivity to the audience.

“It does seem like there is this different kind of external energy that lays internally with them,” LaGrega said.

“It is almost like they are floating, that there is just something deep in them, something bigger than us that keeps them floating on stage and gives them that power to showcase what they are showing throughout the entire experience.”

“I am a very spiritual person, and I do believe in the power of connection through people and through emotion and feelings,” LaGrega said.

“That was something that I felt was displayed perfectly throughout the show.”

Spirituality is firmly rooted in China’s ancient culture. People believed in the teachings from Buddhism, Taoism, and Confucianism for thousands of years, up until such faiths and ideas were systematically destroyed during the Cultural Revolution launched by the Chinese Communist Party (CCP) four decades ago.

For LaGrega, the most important takeaway she would leave the theater with was a message of hope.

“You know how they say you can never find the light without the dark,” La Grega said. “So even in a culture where there [is] so much turmoil, and so much hurt and anger and really hard times and despair, there is so much beauty as well.”

Along with stories from China’s ancient past, Shen Yun also depicts, through classical Chinese dance, tales of suppression of faith in today’s China.

The performance contains stories based on true events arising from the Chinese communist regime’s persecution of spiritual discipline Falun Dafa, also known as Falun Gong. The discipline was banned by the CCP almost two decades ago, after an estimated 70 to 100 million people were practicing in China. As a result of the persecution, adherents of Falun Gong have been imprisoned, tortured, and even killed for their faith.

Despite the despair coming through such segments, ultimately it was the triumph of goodness and beauty that stole the show.

“That was the most important thing I took away from it, and I hope my children took away as well,” La Grega said.