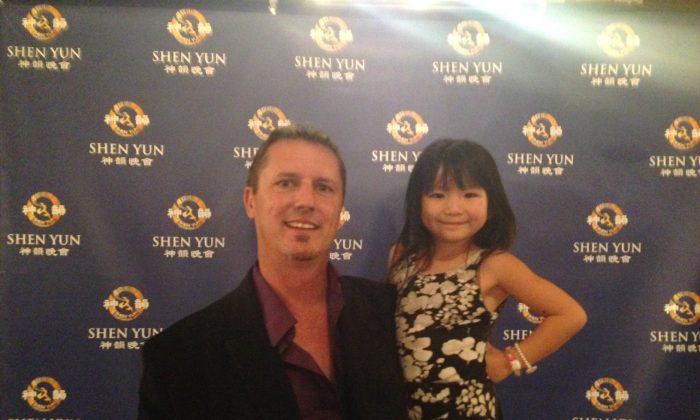 SAN FRANCISCO—Hailed as a master artist, Jeff Neugebauer is a painter in the Renaissance style. So when he saw Shen Yun Performing Arts–the world’s premier of classical Chinese dance company–he was captivated.

“Well, it’s beautiful. I think the colors are great and the dancing is wonderful,” he said at intermission. “We’ve enjoyed it so far.”

Mr. Neugebauer was with his Chinese-born wife and child at the War Memorial Opera House on Jan. 4 where Shen Yun will be performing through to Jan. 12.

Sophisticated dance techniques, an orchestra joining instruments from both the East and West, beautiful costumes, and a stunning back drop—this is Shen Yun at first glance, the company’s website explains. But digging deeper, one discovers a sea of traditional Chinese culture.

“Mortals and divine beings merge on stage as one. Principles such as benevolence and justice, propriety and wisdom, respect for the heavens, and divine retribution, all come to life, washing over the audience. Originating from Confucianism, Buddhism, and Taoism, these ideals are the essence of traditional Chinese culture, almost destroyed under 60 years of communist rule,” according to the Shen Yun website.

His daughter said she liked the songs, while her father loved the music.

Speaking of one dance with a theme of freedom of belief, he said, “My wife was like–they couldn’t do this in China!” Mr. Neugebauer said.

He was fascinated with state-of-the-art graphics technology. Shen Yun’s digital-backdrop team creates vividly animated settings, extending the stage and transporting the audience to a world where heaven and earth are one, says the website.

“Well, all the sets are beautiful, the colors … It’s really cool the way that they come down from the screen and jump onto the stage. I think that’s a great effect and it works really well and they do it. You know, the timing is beautiful. So really it creates that imaginative environment where you can just get caught up in it. I like it.”

Mr. Neugebauer has been drawing and painting since he was a child, according to his website jeffneugebauer.com. He has continued this passion throughout his life. Utilizing the Florentine techniques of the Renaissance, Mr.Neugebauer has incorporated the knowledge of the great masters into his painting. His work has gained traction among private collectors and museums including the permanent collection of the Arizona State University Art Museum and the Haarmann Reimer Corporate Museum in West Germany.