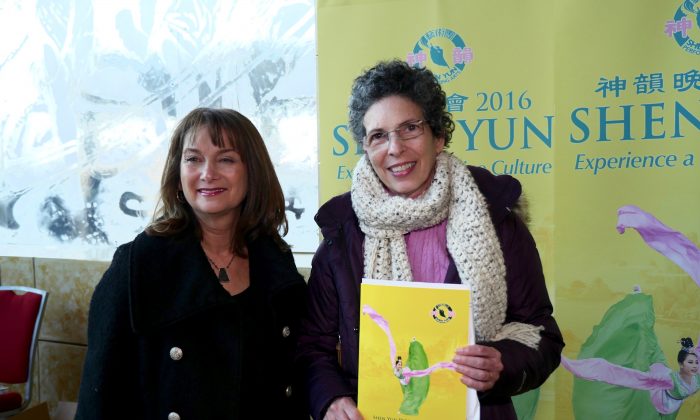 ATLANTA—”Each dancer is like a jewel,” said Dora Manela about Shen Yun Performing Arts’s dancers. “Each one is trained to the limit,” the master instructor of classical ballet added.

Once a professional ballerina from Brazil, Ms. Manela has seen Shen Yun before and appreciates the company tremendously because the dance is “milenar,” Portuguese for “ancient.”

Classical Chinese dance, which Shen Yun highlights, developed over thousands of years, and today may be counted as one of the most comprehensive and expressive dance forms in the world.

Based in New York, Shen Yun trains its dancers in the most traditional way possible, emphasizing the dance’s core components: bearing, form, and technical skill.

In her praise, Ms. Manela happened to touch on each of these components.

The technical elements include leaps, spins, and difficult tumbling moves. “When they are doing things that were so difficult, their feet are like feathers. You don’t hear one thump,” said Ms. Manela, who saw the performance at the Cobb Energy Performing Arts Centre.

Of form, the specific poses that must be mastered, she said, “The delicacy of the girls—the hands, the head positions, each one is a sculptor. It’s really an art form.”

And of the dancer’s bearing, or inner expression, the “tradition of telling a story with mime, with expression, with dance, is also a particular Chinese talent and tradition that I love. … It moves me to tears,” said Ms. Manela, who attended with her friend, Sandra Cutler, an attorney, on Jan. 17.

Because of its potential to express, classical Chinese dance excels at telling stories, and Shen Yun uses that inherent quality to bring to life tales from the beginnings of China’s civilization all the way to the present, representing 5,000 years of uninterrupted history.

While Ms. Manela addressed the artistic side of the performance, her friend Ms. Cutler took another slant: “Good for this company to be courageous enough to articulate [their] beliefs both musically as well as through dance.”

Behind the artistry, Shen Yun’s mission in restoring China’s traditional culture is linked to the importance the Chinese once placed on time-honored values and spiritual beliefs.

But despite the long-cherished spiritual beliefs of Chinese culture, Shen Yun cannot perform in China today. The atheistic communist regime has banned the company, and in fact has systematically been destroying Chinese culture for decades.

Ms. Manela explained that coming from a Jewish tradition, where tradition and religiosity go together, she sees the killing of the soul—destroying a culture—is as huge a crime as killing an individual.

“To have a government that doesn’t understand the milenar tradition of a people in religion and culture is baffling to me.” So she’s glad Shen Yun has a chance to exercise who they “are as artists, as religious people, as traditionalists.”