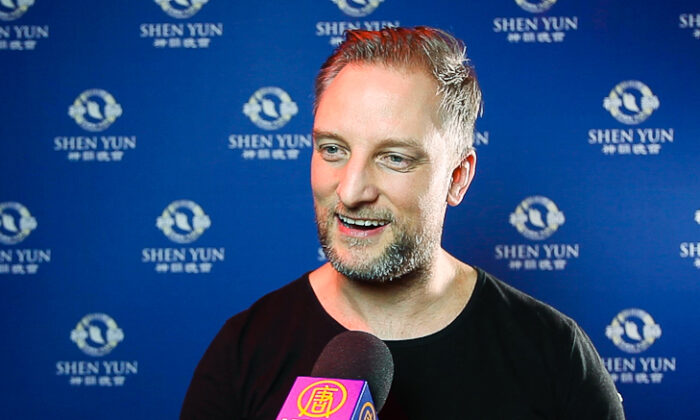 COLOGNE, Germany—Oliver Tomic, the owner and teacher of a martial arts school, attended the second Shen Yun Performing Arts performance at the Musical Dome Cologne on Feb. 12, 2020. Since the Musical Dome opened doors in October 1996 after a record construction time, it has become established as a permanent fixture of Cologne’s cultural life.

New York-based Shen Yun has won the heart and admiration of its audiences worldwide, by using classical Chinese dance, digital interactive backdrops, and a full orchestra. Its audiences are amazed that these performers endeavor to revive 5,000 years of China’s ancient culture through the fine arts of music and dance.

Tomic was fascinated by the male dancers’ performance and said, “The male dancers presented a form of martial arts through their movements. This immediately caught my eyes. They are masters of their art, especially when it comes to their display of power, energy and absolute perfectionism.”

Tomic continued, “I know exactly what I’m talking about, as I have started on my life of performances 32 years ago. Truthfully, I am fascinated by people who can present their movements openly and without hiding anything.”

I would say that the movements were perfection,” he said. “My past is going through my mind while watching these dancers, and recalling how I performed some of these movements.”

Shen Yun ‘will stay forever in my mind’

“The artists are outstanding–world-class. Yet, the music kept touching my heart. Also, the connection between music, culture, and movements will stay forever in my mind.”

Shen Yun brought him much joy and opened his eyes to what’s important in this world.

“The human relationships, the being there for each other, the survival, that’s all there. The knowledge that one should not be beholden to selfishness, but that there are other things that bring happiness and satisfaction. “

He felt that the artists were humble and one perceived that money is not what’s important in one’s life. “The entire show conveyed the importance of human relationships,” said Tomic.

Before ending the conversation he conveyed that “goodness will return to this world, although the bad substances are rather powerful at this time— they will never outlive the goodness. One day the eyes of the people will open, and the wish is to return to the goodness if one wants to live a satisfied life.”