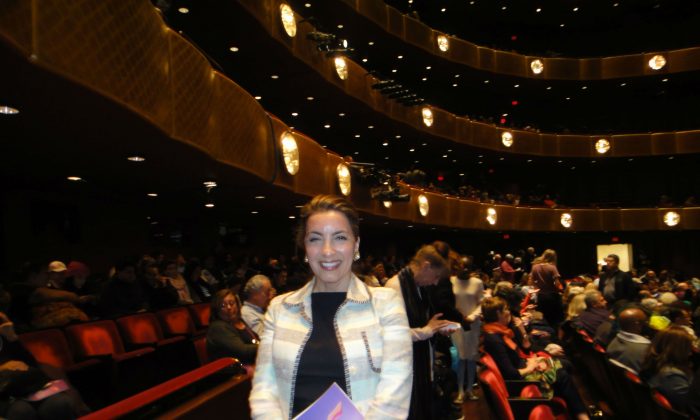 “We love it. It’s wonderful,” Giacalone said after watching the performance with her companion Martin on March 15.

“It’s actually everything that we thought it would be. It’s colorful, beautiful, and traditional.”

Shen Yun Performing Arts is a top classical Chinese dance company founded with a mission to revive 5,000 years of traditional Chinese culture through music and dance. In just over a decade, the company has expanded from one to six touring contingents, which each travel the world performing a new program each year.

The marketing executive was enthralled by the gracefulness of the dancers, and particularly enjoyed the classical Chinese dance “Sleeves of the Tang Palace.” In that segment, female performers dance with long flowing sleeves, a garment worn by women of the court in the Tang Dynasty, a period that ranged from the 7th to 10th centuries.

But the piece that resonated with Giacalone the most was the modern-day tale of suppression of faith in China.

“There was a tremendous amount of emotion, and the one number where they talk about something that is very current and our news in term of persecution. That part was upsetting but it’s beautiful,” she said.

In the story-based dance”Goodness in the Face of Evil,” a young women is sent to prison in China for practicing the spiritual discipline Falun Dafa, also known as Falun Gong.

Falun Dafa was banned by the Chinese Communist Party in 1999 after the practice’s rise in popularity in the 1990s resulted in around 70 to 100 million people practicing in the country, according to estimates cited by Western media. Since then, practitioners of Falun Dafa have been the target of a sweeping crackdown that has seen thousands of practitioners imprisoned for their faith.

Giacalone appreciated the message of the segment exposing the abuses in today’s China. Overall, she thought such themes were deftly depicted.

“The dancers are incredible and actually it’s beautiful. And the messages are beautifully conveyed as well,” she said.

Giacalone wasn’t the only way blown away by the dancers’ skill; former ballet dancer Alicja Cohen was rendered speechless while watching the dancers’ movements, flips, and expressions.

“I was speechless when I was looking at them. I really can’t believe what they were doing,” Cohen said.

Cohen, who is currently an art dealer, used to be a professional ballet dancer in Poland and also in the United States.

The flexibility of the dancers stunned Cohen so much that she text messaged her friends about it immediately after watching the performance.

“They don’t have bones,” Cohen said.

In addition, what was impressive, Cohen said, was that it wasn’t only a few performers pulling off the difficult techniques, but all of them.

Overall, the quality of the performance was the absolute best, said Cohen. And the spectacle was one that demanded to be re-experienced.

“Next year when you come, I’ll be here. I really enjoy that very very much.”