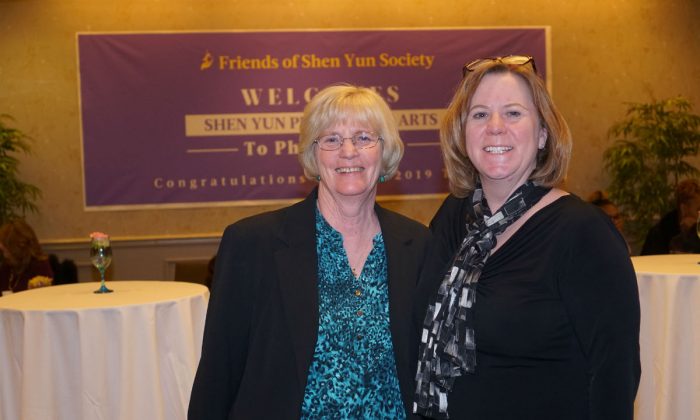 PHILADELPHIA—Ladies in flowing blue gowns with matching fans glided across the stage as though they were floating on clouds. In the audience, Joanne McFall couldn’t take her eyes off of them.

“That was very beautiful and very expressive,” said McFall, a market president for Keystone First.

McFall saw Shen Yun Performing Arts with her mother Carol Geddes at the Merriam Theater for the evening performance on Feb. 21. She thought being able to experience a traditional dance and music production that aims to revive China’s 5,000 years of semi-divine culture was “a nice way to see another culture in one evening.”

So much so that she hopes to bring her two daughters, who are dancers, to the performance sometime in the future.

Geddes was also impressed by the dancing and the acrobatic ability of the dancers.

“I especially like … the backflips—it’s something else,” Geddes said.

Along with dancing, Shen Yun performances are accompanied by an orchestra that blends Chinese and Western instruments to create a unique yet harmonious sound. McFall said she enjoyed listening to the distinct orchestra.

“I really liked that combination of the Eastern and Western instruments, that made it very entertaining,” she said.

The New York-based company is currently in the midst of its 2019 tour and is set to perform in over 100 cities around the world. The performance is like a window into a cultural treasure that is nearly lost and allows audience members to get a glimpse of how China used to be before communist rule.

“I think it’s very interesting, it’s not something I really was aware of until coming to see the show tonight. I think it’s a worthy effort to do that,” McFall said.