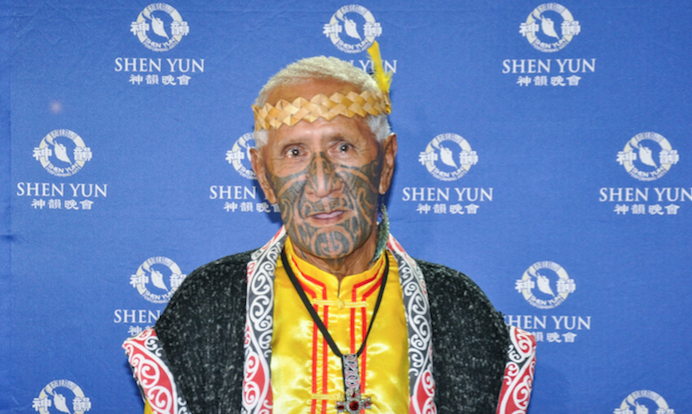 “I’m very much into human rights,” said Mr. Akarana, before unloading a number of injustices of his own.

“I’ve been to all the shows and I enjoy them. That’s why I come,” Mr. Akarana said.

Mesmerising choreography, orchestral music, and animated backdrops, Shen Yun takes the audience on a journey through magical realms of beauty and purity, a place where goodness always wins and legends come to life.

Mr. Akarana was bestowed chiefly status by a confederation of chiefs and given approval to speak on their behalf, he said.

He was enjoying the world-renowned Shen Yun performance along with his wife, Arani Paraone, and his son, Xavier Tapihana Paraone.

His wife, Arani Paraone was blown away by the performance.

“The activity, the background imagery, it’s just so beautiful, all of it, and the performances … it’s so expertly done! What a great artist—the person who put this altogether, has done it again—this is my third time.

“It’s just awesome … The orchestra is beautiful, the music—I enjoyed every bit. I really loved it,” she said.

Her family, also of Maori descent, understood what it was like to suffer oppression, she said. It was reminiscent of China’s 5,000 years of divinely-inspired cultural heritage being threatened to extinction, under communist rule.

“It’s just so close to how Maori have had the same kind of background. … They all intertwine with one another, very much the same. We are all one.”

Her daughter had explained the brutal suppression of the ancient spiritual practice, Falun Dafa, in China. Since 1999, hundreds of thousands have been arrested, jailed, and some tortured to death.

“She has tried to tell us about the sad parts as well, which seem to have really hurt a lot of people, hurt their lives in a grave way. I’m very sad about what is happening [in China].”

Xavier Tapihana Paraone, who was seeing the Shen Yun presentation for the very first time, was intrigued.

“I didn’t understand that there is an actual struggle in China in regards to Falun Gong and Falun Dafa, so hearing that information today is quite surprising.”

“I found with me being a martial arts practitioner and watching the movement with the dance and seeing similarities with the actions and the movement,[it was] fantastic.”

He had worked in Australia as a personal bodyguard and a protection officer in the corporate sector, looking after executives in the mining sector, and the film industry, he said.

Only recently he decided to put his career on hold and move back to New Zealand to care for his elderly parents.

“Family values are important, and it wasn’t a hard decision for me to make, put my career on hold and my business aside to care for my family,” he said. “I think it was destiny for me to come home and care for my parents.”

Mr. Paraone said the Shen Yun performance was an eye-opener.

“I came here today with an open mind, and leave now understanding the struggle with Falun Gong and Falun Dafa. My eyes have been opened. But the performance on the whole—amazing, amazing.”

Reporting by Libei and Raiatea Tahana-Reese