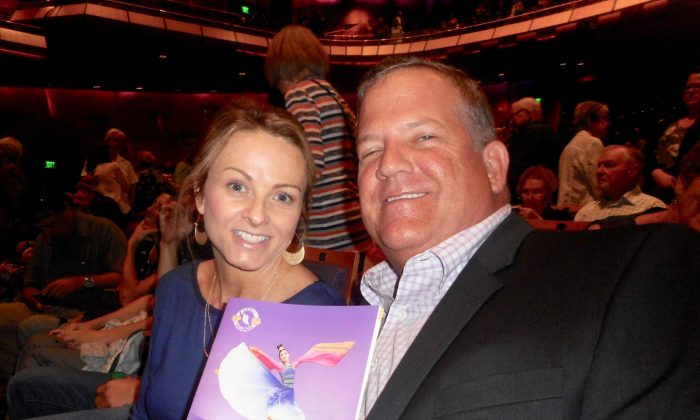 MESA, Arizona—Classical Chinese dance is as much about the spiritual as it is the physical. Shen Yun Performing Arts dancers strive not only to wow audiences with their mastery of difficult techniques and expressions, but also to convey their inner world through such movements, sharing a piece of their heart with the viewer.

Marty and Stephanie Brown indeed felt this as they watched Shen Yun perform at Ikeda Theater in Mesa, Arizona, on March 3.

“The way they express their emotions through dance, they did really a good job,” said Marty, a manager at Senergy Petroleum and president of a company providing oil filtration services.

“It was touching,” he said.

“There is an energy about wanting to share the experience of China, their history,” Stephanie said.

The New York-based company performed in Mesa as part of its 2019 world tour, wherein six equally large contingents will stop at more than 130 cities across four continents to share the essence of 5,000 years of traditional Chinese culture to modern audiences through music and dance.

Shen Yun tells stories from China’s vast history through classical Chinese dance. These stories, spanning from ancient times to modern-day China, speak to the values and traditions that have laid the foundation of Chinese society for millennia.

Stephanie, a realtor, felt that the dancers were personally embodying those values while on stage.

“The emotion and intensity are coming from something personal. So while they are acting, it’s something you could feel they truly understand,” she said.

“They are delivering the message through dance, it’s impressive.”

One of those messages came from a story depicting a young woman who was detained and tortured for practicing spiritual practice Falun Gong in China. The practice was banned by the communist regime in 1999, and adherents have since been arrested, detained, imprisoned, tortured, and even killed.

That particular program sparked a range of feelings for Stephanie.

“I think you could touch on every emotion, because you see joy, you see hope, you see happiness, every emotion of the spectrum you can see through the show,” she said.

When Stephanie saw the suppression of faith by the communist regime unfold before her, “you can see and feel unnecessary suffering, lack of understanding of why, lack of control of their situation their own future. It’s sad.”

Marty had a similar experience.

“Some of the struggles of the people, strive for freedom,” he said. “You can see, you can feel that.”

While the performance portrayed tragic real-life events, its take-away message was one of hope and peace, Stephanie said.

She said the communist regime over the decades stripped away the spiritual elements from Chinese culture, leaving the country in a state of turmoil and hopelessness. That is why Shen Yun’s mission is so important.

“If [spirituality] is brought back to people, then it empowers people,” Stephanie said.

“It empowers them and brings the peace, hope, and joy in a way [that] they can build their family and their life. … If that grows, it brings more hope.”

Marty agreed that the message of hope is useful especially at a time when there is a lot of division.

“Hope and change are always great things, [it] brings people back together,” he said.

With reporting by Zhang Qian.