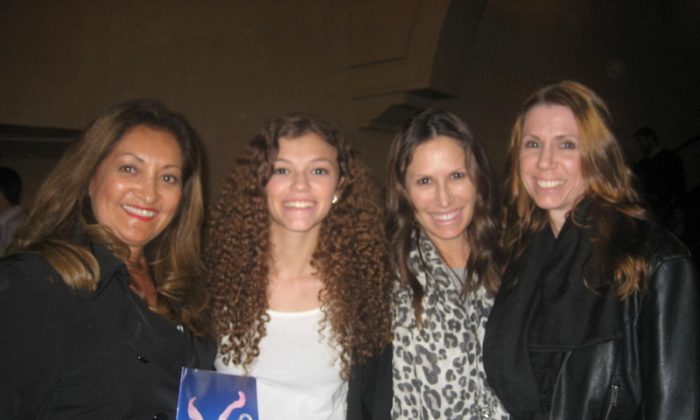 Josie Juncal [second from right] and her sister Janica Velazquez, niece Lily Velazquet, and mother Dilia Juncal at the Shen Yun Performing Arts performance at the California Center for the Arts on March 1, 2014. (Jana Li/Epoch Times)

Established in 2006, New York-based Shen Yun is a non-profit organization dedicated to reviving 5,000 years of Chinese civilization through breathtaking performances that feature classical Chinese dance and music. In just a few short years it has become widely regarded as a global phenomenon, reaching millions of people in close to 20 countries and over 100 cities.

Ms. Juncal especially enjoyed the costumes used in the performance.

“[Their] costumes were gorgeous. Loved all the color,” she said, adding that “the ways they were able to use their costumes was beautiful.”

According to the Shen Yun website, “Shun Yun’s costume artists collect countless designs of traditional attire, ranging from those of emperors, ministers, and generals to the everyday clothing of the common people. They use bright colors to tailor and recreate hundreds of new pieces each season. Every detail is given meticulous attention and is a result of artistic inspiration and careful polishing.”

Also in attendance were Ms. Juncal’s sister, Janica Velazquez, and her niece Lily.

“It was brilliant, it was very pretty,” added Lilly. “I have never seen anything like it.”

The final addition of Ms. Juncal’s family outing to Shen Yun was her mother, Dilia Juncal. The matriarch of the family summed up the night with high praise.

“I loved it; it was beautiful … amazing … mystical … it was enchanting, it’s everything wrapped into one,” she said. “I’m so glad we came.”

Shen Yun’s New York Company will be performing its final two shows in Escondido Sunday March 2, before moving on to Tempe, Arizona.