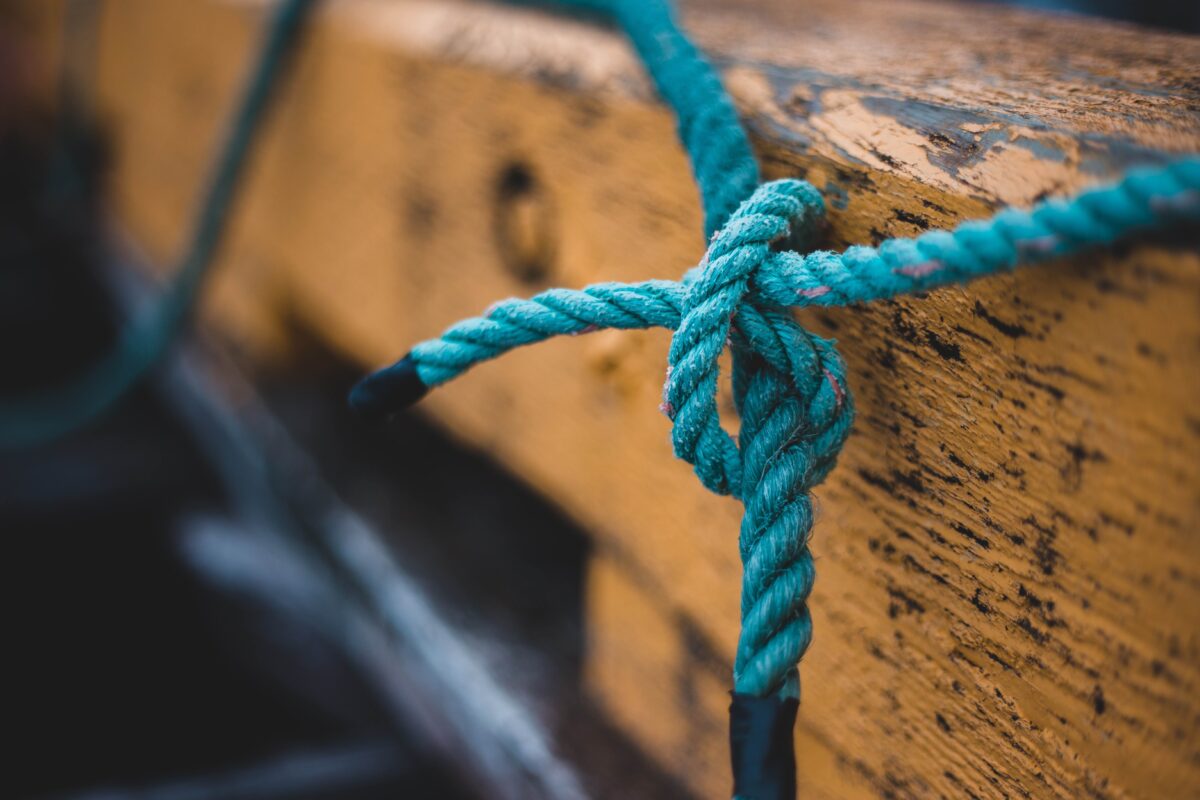 Learn the 5 essential knots—for everything from tying your shoes to trussing a turkey
BY Krista Thomas TIMEJune 1, 2022 PRINT

The way someone ties knots in his or her shoelaces tells a lot to knot expert and analyst Lindsey Philpott.

Knots are lumps or knobs formed by the intersection of interlaced materials such as string or line.

Tree climbers use knots; window blinds employ knots for raising and lowering; and fashionistas secure hoodies around their faces with knots.

But not for Philpott.

“When somebody comes up to a demonstration or a display stand that I might have, … one of the first things that I do is to look at their shoes and see, ‘Have you tied your shoes correctly? Are the loops going across your shoe, or are they going up and down your shoe?’” Philpott said.

Elements of knot tying are in just about every form of human adventure, and because of that fact, Philpott said people should know at least five essential “knots”: Half Hitch, Overhand Knot, Clove Hitch, Constrictor Hitch and Trucker’s Hitch.

“I’m fascinated by knots. I think they’re just the most amazing structures in the world, and they’re not given enough in the way of recognition and following by people who should know more,” Philpott said.

Tying knots isn’t unique, as it’s something that humans have been doing for nearly a quarter of a million years, Philpott said.

“When humans first started making shelter, other than in caves, they used a series of sticks which they put together in the form of a teepee or wigwam,” Philpott said. “They had to tie them together at the top because, naturally, with any kind of a conical shape like that, things start to fall apart unless you tie them together, and they soon realized that they needed some form of tie to go around the top.”

From using knots for shelter to using them on ships, practical knot tying has thrived.

Clifford W. Ashley, the author of “The Ashley Book of Knots,” which is known as the “definitive book on knots,” learned to tie knots from sailors. Published in 1944, Ashley’s book features 7,000 drawings that represent over 3,900 knots.

“The sailor, from the very nature of his craft, has a dependence upon rope and a consequent familiarity with knots that is demanded of no other workman,” Ashley wrote in the book. “It follows that most important knots owe both their origin and their names to the requirements of a ship at sea.”

Sailors have divided knots into four classifications: hitches, which are knots that attach a rope to an object such as a post; bends, which unite two rope ends; knots (knobs and loops); and splices, which join ropes by untwisting and then reweaving strands. Many times, the term “knot” is an inclusive term used for the “whole subject.”

Readers of “The Ashley Book of Knots” will find that names of knots differ throughout languages, even though the knots are tied the same way.

“The same knot may be attributed to several countries, just as Flat ‘Over-one-and-under-one’ Sinnet (braided cordage) … is called by English-speaking sailors ‘French Sinnet’ and by the ever-polite French ‘Tresse anglaise,’” Ashley wrote.

The first thing to determine before knot tying is, “What do you want to use the knot for?” Philpott said.

“‘If you want to … truss a turkey for putting in the oven at Thanksgiving, then you need a knot that would hold on a slippery surface, and you need a knot that can be tied with a food-safe ligature or string,” Philpott said. “The next question that comes up is what kind of string, rope, line, twine.”

Most people already know certain knots used in everyday life, even though they don’t necessarily know the knots’ names or how to tie them.

Knots to know, according to Philpott, are the Half Hitch, Overhand Knot, Clove Hitch, Constrictor Hitch, and Trucker’s Hitch.

A Half Hitch consists of creating two interlocking elbows of line that can then bind onto an object.

Most line will accept a Half Hitch.

“So, would it make sense to put that onto a turkey that we’re trussing? Well, yes, it would in certain places.”

With an Overhand Knot, two elbows are interlocked, and then an end is tucked through.

“That may sound a little bit complicated, but it’s really not,” Philpott said. “Everybody ties Overhand Knots all the time. They may not know that they do, but they tie it all the time.”

Hagfish (slime eels), too, tie themselves into Overhand Knots to avoid predators. A hagfish can slide the knot along its body, pushing all the slime towards the attacker. The hagfish escapes when its predator gets “a mouthful of slime instead of a mouthful of hagfish,” Philpott said.

Knots that happen in nature should compel people to know more about how knots happen, Philpott said.

A Clove Hitch is among knot-tying expert Allison Underwood’s favorite knots, the others including a Bowline (creates a fixed loop at the end of a rope), Figure Eight, and Square (created by two Overhand Knots).

“Tying the kayak to a post or a dock or tree, you would use a Clove Hitch and probably add a couple of Half Hitches to it to make it a little more secure,” Underwood told Radiant Life. She has assisted in presenting “Knot-tying basics” workshops during the “Becoming an Outdoors-Woman” program of the Florida Fish & Wildlife Conservation Commission. Her father taught her to tie knots. The two began sailing together on a sailboat when she was age 2.

“I don’t do much sailing, but I have a couple kayaks, and I need knots to tie them on the roof of the car or to tie them, like if you’re stopping for lunch, to tie it to a tree or something,” Underwood said. “My dad told me … the most important thing about knots is that they are easy to untie, and they’re easy to tie.”

The knot is called a “Constrictor Hitch” because it needs an object inside it in order to work.

“If you ever want to secure a hose onto an end fitting on a faucet, for instance, and you don’t want it to slip off, then you would use a Constrictor Hitch around that hose,” Philpott said. “Once you’ve got it in place and pull tight on the two ends, you’ll end up with a structure that almost takes a knife to undo.”

The knot is made from three parts that when tightened has a “3-to-1 power-driven advantage,” Katie Licavoli wrote in the article “How to Tie Knots.”

Because knot tying is a broad subject, people should learn easy knots, such as the ones Philpott described, and build from there.

One way to learn to tie knots is to ask a Boy Scout or Girl Scout group for help, said Philpott.

“They tie a lot of knots, and they’re given special instructions by people who know what they’re doing,” said Philpott, who moved to the United States in 1983 from Bahrain in the Arabian Gulf.

Different states have the “Becoming an Outdoors-Woman” program that may include seminars on knot tying, Allison Underwood said.

Underwood suggested that people practice knot tying with someone.

“Have somebody hold their arm up and they pretend like they are the dock post,” Underwood said.

When she was growing up in North Carolina, Underwood at times didn’t tie a sailboat to a post well.

According to Philpott, people can’t “do without knots.”

“As humans—I count myself among the number that I’m about to describe—we are lazy,” he said.