Magistrate Says, ‘Shen Yun Music Is Like the Beautiful Sound From Heaven’ 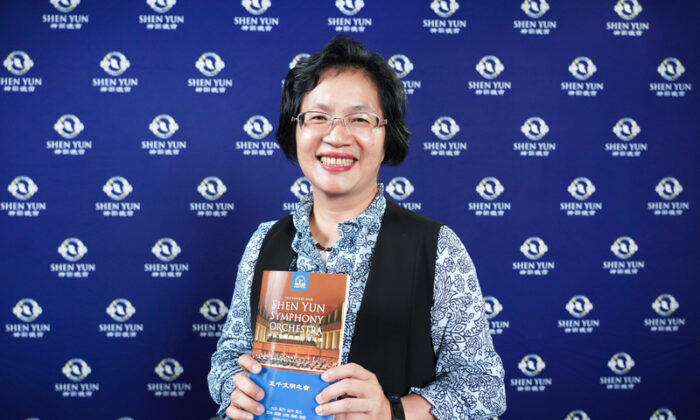 This was the magistrate’s first opportunity to hear a Shen Yun concert, and she was fascinated by the performance—she felt that her mind was cleansed by the pure melodies. “Shen Yun music is like the beautiful sound from heaven,” Magistrate Wang said. “I feel [Shen Yun music] is overwhelming and very eventful.”

“Regardless of whether they are human emotions or the tremendous momentum of vast grasslands, all of them are depicted in the music perfectly,” she said.

Shen Yun’s music was not only touching on Wang’s emotions but taking her to another place in history. “I feel that the music portrays various distinctive scenarios including the beauty of immense grasslands in Mongolia—it is very touching,” she said.

“Since I had read the notes on the program beforehand, various stories seemed to appear in my mind one after another [during the performance],” Wang explained. “I was truly amazed by the music that is full of emotions of pleasure, anger, sorrow, and joy.”

The magistrate enjoyed the two conductors’ performances very much. “The conducting movements of the first conductor [Milen Nachev] are dynamic and powerful, while those of the second one [Dmitry Russu] were softer and subtler,” she said. “Through their batons, the magnificent scenes seemed to appear [in my mind]. Their conducting skills are amazing.”

Wang also praised the Shen Yun Symphony Orchestra’s mission of promoting authentic traditional Chinese culture. “While technology is getting more and more advanced, ethics and morality are essential as well. … I would like to thank Shen Yun for its long-term efforts in promoting the 5,000 years of Chinese culture by mean of integrating art in our daily lives,” she said. “It benefits the elevation of our lives and souls.”

“I hope that we can promote [Shen Yun concerts] together.”