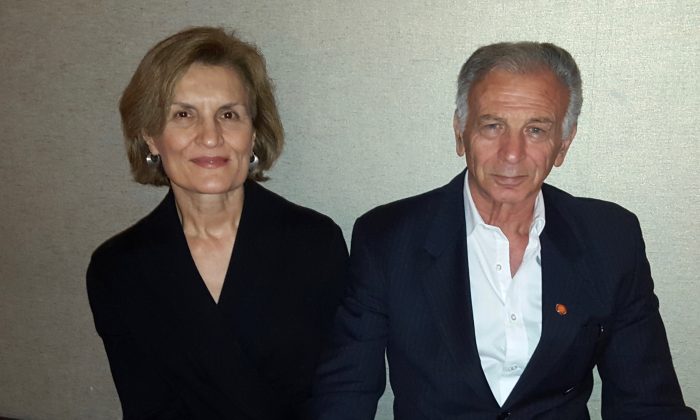 NEW YORK—The loss of an ancient culture is nothing short of a global tragedy, and thus the revival of one—the 5,000 years of traditional Chinese culture—was all the more touching for Nestor and Milica Oginar, who saw Shen Yun Performing Arts at Lincoln Center.

Retired English literature professor Nestor Oginar is well known in the Macedonian-American community for his outspoken advocacy for his home country and people.

Much like China, Mr. Oginar explained, Macedonia has suffered because of communism. His family home had been targeting by 70 large-caliber shells, his sister hiding in the cellar survivng only on smuggled bread and milk. Lives were uprooted, and the culture and religion of Macedonia were destroyed.

Only recently have the couple gotten back in touch with their religion, Mrs. Oginar explained, and so they were deeply appreciative to see New York-based Shen Yun on March 9.

“This [Shen Yun] springs from the very bosom of the Chinese culture. It has to be preserved, it’s a national treasure, it’s a world treasure,” Mr. Oginar said of the performance during intermission. “[It] is an amazing mixture of breadth and width of the culture.”

The classical Chinese dance and music company was founded by artists only 10 years ago to revive traditional Chinese culture. The divinely inspired culture had flourished for 5,000 years, until communism came into power in 1949 and sought to eradicate the old traditions and beliefs.

But the artists of Shen Yun, who came from around the world to New York, aim to revive this culture and share it with the world.

“Oh, I pray to God that it succeeds, because what the communist revolution has done, not only in China but elsewhere … they wiped out the deep traditions, and I think it must be revived,” Mr. Oginar said.

In that way, Shen Yun was something anyone who cherishes history or culture must experience to help bring about “a revival and renaissance to something that had been, long before any sort of communist ideology,” Mr. Oginar said.

“It comes from generations in the past and it tells of so many stories of our culture, of tradition,” he said.

And all the better that the artistry of the production was of the highest caliber—Mr. Oginar praised the classical Chinese dance and the excellence of how the performance was put together. It showed New York the sound, color, and stories, of an ancient civilization, and put it all together with modern technology to create almost magical moments.

Even the color coordination was an aspect he had to comment on. In the colors, he saw “the brightness, the promise, the joy of life.”

Mrs. Oginar felt the costumes conveyed so much.

“It’s very fluid … it brings out the femininity of the girls, and at the same time it does not cover the masculinity of the male dancers,” she said.

“I found it quite intriguing, and it was almost like the divine, the spiritual was in the movements in a way,” she said, and it came through in the costumes and fluidity.

Classical Chinese dance is a form almost as old as the culture, and is what Shen Yun uses to bring to life the beliefs and principles of traditional Chinese culture, its website explains. They are principles like wisdom and propriety, benevolence, loyalty, and kindness.

Mr. Oginar also observed that this sort of spirituality was basically the foundation of the culture. According to Shen Yun, that was very much the case. Society was governed by principles stemming from the religions of Buddhism, Taoism, and Confucianism.

He felt as if experiencing ancient theater.

“It has to be preserved,” Mr. Oginar said.