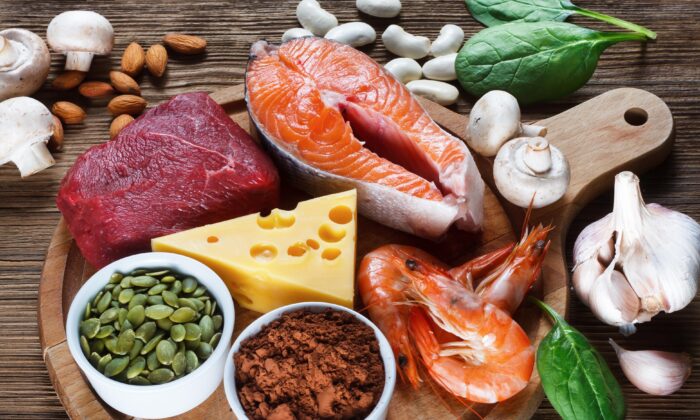 Although conventional medicine suggests there is no known cure for viral infections, there are steps you can take to support your body’s immune system as it fights a virus.

Antibiotics aren’t effective against viruses since they only work against bacteria. Bacteria are microorganisms made up of a single cell while viruses, which are even tinier, are parasitic and can’t replicate independently. Viruses must insert themselves into your normal cells, where they use your cell function to multiply.

Your body uses a complex process to find, fight, and destroy viruses. One way it does this is to use zinc inside the cells to stop the virus from replicating. Zinc may effectively reduce the length of the average cold by 33 percent, according to a meta-analysis published in the Journal of the Royal Society of Medicine in 2017. Emerging research presented at the 2020 ESCMID Conference on Coronavirus Disease suggests zinc plays a role in COVID-19 as well.

Zinc is normally found in your cells. It’s also used to manufacture proteins, DNA, and is required for nearly 100 enzymes, wound healing, and cell division. Interestingly, an adequate amount of zinc is required for maintaining your sense of taste and smell. One of the early signs your body is fighting SARS-CoV-2, the virus that causes COVID-19, is the loss of these senses.

Although you can absorb zinc from a variety of different foods, red meat and poultry are the major sources in a standard Western diet. Other foods high in zinc include nuts, dairy products, and fortified breakfast cereals. Certain groups of individuals may have more difficulty absorbing zinc from their diet. This includes people with:

Data presented at the 2020 European Society of Clinical Microbiology and Infectious Diseases on Coronavirus Disease suggest that people who have lower levels of plasma zinc also have lower rates of survival and poor patient outcomes when hospitalized with COVID-19.

The study analyzed the results of patient data gathered from a tertiary care university hospital from March 15 to April 30. During this time, patients routinely had fasting zinc levels drawn when they were admitted to the unit caring for COVID-19 patients. The researchers analyzed data from 249 patients and found the mean baseline was 61 micrograms per deciliter (mcg/dl).

There were 21 patients (8 percent) who died, whose baseline levels were 43 mcg/dl. The baseline of the survivors was 63.1 mcg/dl. Using computer modeling and statistical analyses, the researchers found that low zinc levels, measuring 50 mcg/dl and below, were linked with a 2.3-fold increased risk of death while hospitalized.

After adjusting for confounding variables, the data suggested for every single unit increase of zinc at admission, the individual had a 7 percent lower risk of death while hospitalized. The study was led by Dr. Roberto Güerri-Fernández from Barcelona, who commented on the results:

“We have submitted a paper with this work and some in vitro studies that demonstrate that zinc has some clinical implications in virus control. I believe that if these results are confirmed, further studies with zinc supplementation could be done.

Moreover, some studies have already been done with zinc and respiratory infections. Probably those patients with lower levels are the ones that would benefit the most.”

The results of this retrospective analysis support other reviews demonstrating zinc’s action in the prevention and treatment of viruses and COVID-19. In describing the need for treatment options, one paper published in Frontiers in Immunology this year calls for “cost-effective, globally available, and safe options with minimal side effects and simple application.”

The authors go on to say that “zinc meets all the above described criteria.”

They conclude: “Finally, due to its direct antiviral properties, it can be assumed that zinc administration is beneficial for most of the population, especially those with suboptimal zinc status.” Another paper published this year (in Medical Hypothesis) reviewed the research on zinc’s potential as a treatment for COVID-19  and concluded zinc may have potential benefits for treatment and prevention of the disease.

The reason zinc is such a powerful strategy against viral replication is because of how it works inside the cell to stop the virus.

The double-strand DNA inside the nucleus of your cells is transcribed into a single strand of RNA. This RNA then moves out of the nucleus into the cytoplasm of the cell. There it undergoes another change, which allows ribosomes to read the code and create proteins. These proteins drive the actions of your cells to support optimal health. For example, the proteins can combine oxygen with hemoglobin or modulate cellular metabolism.

When the coronavirus enters the cytoplasm of the cell, it has the same head and tail as your body’s RNA. When the ribosomes read that RNA, they don’t produce a productive protein but, rather, RNA dependent RNA polymerase. This enzyme then reads the RNA of the virus and replicates it.

Since it makes more of the virus, the RNA-dependent RNA polymerase is also known as “replicase.” Within the cytosol, zinc shuts off replicase so the virus can’t duplicate.

However, because zinc is an ion, it can’t pass through the cell membrane without help. In one collaborative study with researchers in the United States and the Netherlands, researchers tested the effectiveness of zinc within the cell by using a zinc ionophore. An ionophore functions as a transporter, moving zinc across the cell membrane. The researchers found that zinc effectively stopped the activity of the RNA-dependent RNA polymerase in the cell.

Using zinc to fight a viral infection isn’t as simple as taking a zinc supplement since the ion requires a transporter. In 2014, a team of researchers investigated chloroquine for its anticancer activity and discovered it increased zinc uptake, resulting in a concentration of zinc in the lysosomes of the cells.

In a second paper published in Medical Hypothesis, researchers outline the direct antiviral effect chloroquine and hydroxychloroquine have by increasing the pH in the intracellular vesicles, which in turn inhibits replication of the virus. They believe that the combination of zinc with hydroxychloroquine would improve the efficacy of the drug.

They also wrote that zinc deficiencies occur more frequently in older adults and in people with diabetes and cardiovascular disease, which are groups of individuals the CDC has identified as having a higher risk of severe disease and poor outcomes with COVID-19. In a call for more clinical trials to evaluate the combination of chloroquine and zinc, researchers at Michigan Technological University write:

“Chloroquine can induce the uptake of zinc into the cytosol of the cell, which is capable of inhibiting RNA-dependent RNA polymerase and ultimately halting the replication of coronavirus in the host cell.

Currently, there are several clinical trials that are currently underway in several countries of the world to assess the efficacy of chloroquine as an anti-coronavirus agent. Since chloroquine has been widely prescribed for use as an anti-malarial, its safety is not in doubt.”

Chloroquine and hydroxychloroquine are medications that have been used for decades to treat malaria. They have known side effects and are generally well-tolerated.

It is important to know that while zinc is important in the fight against viral infections, as Chris Masterjohn, an expert in nutritional sciences, points out on his website, it is possible to get too much zinc, which can depress your immune system and negatively affect your health.

The good news is that while these two drugs are generally well-tolerated, there are other zinc ionophore options you may consider at home that don’t require a prescription. In 2014, a comparative study was published looking at quercetin and epigallocatechin gallate (EGCG) as zinc ionophores. EGCG is a polyphenol found in green tea.

The researchers hypothesized that polyphenols would act as a zinc ionophore and demonstrated this in the laboratory using mouse hepatic carcinoma Hepa 1-6 cells. Both quercetin and EGCG had an added advantage of inhibiting an enzyme the virus uses to infect healthy cells. According to a 2020 study, quercetin, EGCG, and other flavonoids also can inhibit the SARS coronavirus.

There are several reasons to suspect that quercetin may offer hope for treatment against COVID-19. In addition to functioning as a zinc ionophore, quercetin binds to the spike protein of SARS-CoV (the virus responsible for SARS), thereby inhibiting its ability to infect host cells. It also boosts interferon response to viruses and modulates the response involved in a cytokine storm. According to a research review published in Frontiers of Immunology in July,  “There is evidence that vitamin C and quercetin co-administration exerts a synergistic antiviral action due to overlapping antiviral and immunomodulatory properties and the capacity of ascorbate to recycle quercetin, increasing its efficacy.”

I believe one of the most effective treatment options you can use at home is nebulized hydrogen peroxide. I recommend everyone become familiar with the process. You can see a demonstration on Mercola.com. In many cases it can improve symptoms within hours.

While quercetin and zinc are highly effective in the early stages, nebulized hydrogen peroxide is particularly effective when an individual is experiencing shortness of breath.

It is extremely safe and can be administered at home without a prescription. In my opinion, it is one of the absolute best therapies for respiratory viral infections such as COVID-19. Dr. David Brownstein published a case paper about this treatment, which he has used to successfully treat more than 100 patients with COVID-19.

It’s important to get the equipment and peroxide before you need it, since the sooner you start the treatment the better the results will be.

However, it isn’t necessary and not recommended to use this to treat yourself preventively. Instead, use it only if you’re sick or you’ve been exposed to someone who is sick with an upper respiratory tract infection. While I recommend a 0.1 percent dilution of food-grade hydrogen peroxide in normal saline, Brownstein uses an even lower concentration of 0.04 percent.