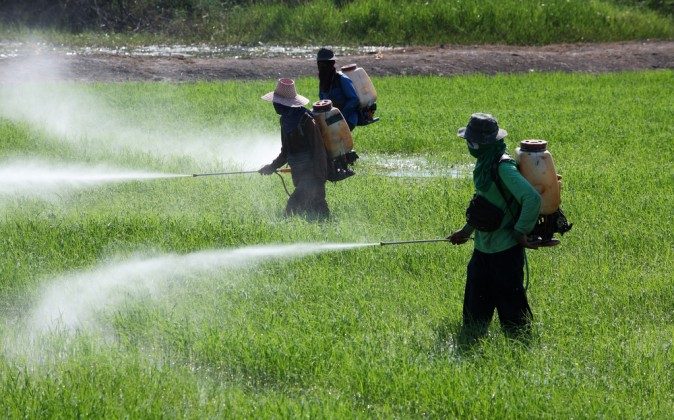 The risk of Parkinson’s disease clearly increases with exposure to certain environmental toxins, such as pesticides. Pesticides, herbicides, and fungicides are potent toxicants that may cause disruptions or damage to the neurological system, including your brain.

What is perhaps most concerning is that even ambient exposure to pesticides has been found to increase the risk of Parkinson’s disease considerably, and this was further confirmed by new research linking the disease to extremely low-level pesticide exposure.

11 Commonly Used Pesticides Linked to Parkinson’s, Even at Low Levels

Last year, UCLA researchers linked a fungicide known as benomyl to Parkinson’s disease. The chemical was banned by the US Environmental Protection Agency (EPA) after it was determined to be a potential carcinogen.

That study found that benomyl blocks the aldehyde dehydrogenase (ALDH) enzyme. When working properly, ALDH changes aldehydes, which are toxic to dopamine cells, into less toxic compounds. When ALDH is blocked, however, this transformation does not occur, contributing to the development of Parkinson’s.

For the most recent study, the researchers revealed 11 pesticides in all that inhibit ALDH and increase the risk of Parkinson’s disease. The effects were seen even with very low-level exposure – levels lower than are currently being used in everyday applications. The study’s lead author said:

These pesticides are pretty ubiquitous, and can be found on our food supply and are used in parks and golf courses and in pest control inside buildings and homes. So this significantly broadens the number of people at risk.”

Certain people appear to be especially sensitive to the effects ALDH-blocking effects of pesticides. The study revealed that people with a common genetic variant of the ALDH2 gene had a two to six times greater risk of developing Parkinson’s disease when exposed to pesticides compared to those without the genetic variant. The study reported:

“ALDH inhibition appears to be an important mechanism by which these environmental toxins contribute to Parkinson’s pathogenesis, especially in genetically vulnerable individuals.”

Unfortunately, unless you’ve been specifically tested you’ll have no way of knowing whether you have this particular genetic variant. And even those who do have it will have a hard time completely avoiding pesticide exposure, since their use is ubiquitous.

Can We Still Say Parkinson’s Disease Has No Identifiable Cause?

Parkinson’s disease is still classified as idiopathic, meaning it has no identifiable cause. But one reason it is likely on the rise is due to many environmental toxins that now bombard your body on a daily basis, with pesticide exposure becoming an undeniable risk factor. According to the Parkinson’s Disease Foundation:

“Epidemiological research has identified several factors that may be linked to Parkinson’s, including rural living, well water, manganese and pesticides.

Some studies have demonstrated that prolonged occupational exposure to certain chemicals is associated with an elevated risk of PD [Parkinson’s disease]. These include the insecticides permethrin and beta-hexachlorocyclohexane (beta-HCH), the herbicides paraquat and 2,4-dichlorophenoxyacetic acid and the fungicide maneb. In 2009, the US Department of Veterans Affairs added Parkinson’s to a list of diseases possibly associated with exposure to Agent Orange.”

Separate research has further revealed that ambient exposure to organophosphate pesticides also increased the risk of developing Parkinson’s disease. Rotenone and paraquat are two additional pesticides linked to an increased risk of Parkinson’s disease, and both are lipophilic, meaning they resist breaking down in water and accumulate in your fat. Both are also known to cross your blood-brain barrier.

Dousing our crops with large amounts of glyphosate — the active ingredient in Monsanto’s broad-spectrum herbicide Roundup – may be another factor in the rising rates of Parkinson’s disease we’re now seeing, as these residues are found in all virtually all food containing genetically modified ingredients.

Avoiding pesticide exposure – around your home, in your community, and via the food you eat – is clearly important for reducing your Parkinson’s risk, as is reducing your exposure to environmental toxins of all kinds. Exposure to industrial solvents, including TCE, a common degreasing agent and dry-cleaning chemical, has also been linked to Parkinson’s disease, for instance. So along with avoiding the use of solvents and pesticides in your home and garden, eating organic foods as much as possible will help you avoid unnecessary exposure to these chemicals.

Another important and often-overlooked environmental risk factor is “silver” amalgam dental fillings, which actually are more than half mercury. Mercury becomes a biochemical train wreck in your body, causing your cell membranes to leak, and inhibits key enzymes your body needs for energy production and removal of toxins. Mercury toxicity can lead to major inflammation and chronic illnesses such as Parkinson’s disease.

A Healthful Lifestyle May Lower Your Parkinson’s Risk

Parkinson’s disease is a neurological disorder in which neurons in a region of dopamine-producing cells within your brain known as the substantia nigra, required for normal movement, begin to die. As the disease progresses symptoms include increasingly slow motor function, tremor when at rest, muscle rigidity, and abnormalities in your walk. Up to one million Americans currently have Parkinson’s disease and 60,000 more are diagnosed each year.

As a disease that currently cannot be cured, prevention of Parkinson’s disease is crucial. People over 60 years of age used to make up the majority of those afflicted, but with increasing lifestyle factor risks like chronic exposure to pesticides and a generally increasing toxic burden, cases are now being reported regularly in people under 50 and even under 40 years of age.

Parkinson’s is strongly related to lifestyle choices, which is good news because it means there are steps you can take to modify your risk of this disease. Eating a varied whole-foods diet that includes healthful veggies like peppers appears to be one simple way to lower your risk, especially since a lack of folate is also linked to Parkinson’s (and veggies are the only source of this important vitamin; most vitamins contain the semi-synthetic analog known as folic acid). Additionally, the following nutrients are also important and may help you to significantly lower your risk:

Finally, your best bet for minimizing health risks from pesticide exposure is to avoid them in the first place by eating organic as much as possible and investing in a good water filtration system for your home or apartment. If you know you have been exposed to pesticides, the lactic acid bacteria formed during the fermentation of kimchi may also help your body break down pesticides. So including fermented foods like kimchi in your diet may also be a wise strategy to help detox the pesticides that do enter your body.